Having taken a break from painting Polish troops due to getting some painting commissions I finally got around to completing the last elements for my Early Polish army.

First up are the last of the Irregular Miniatures NR41 Polish Spearmen castings.
Ten elements of Irr Sp I that round out the 40 elements I need for this army. There are five figure sculpts in this casting code and I decided that for the Poles I would only use four of them.

This means that I have a large batch of the fifth sculpt left over which are perfect for Russian spearmen from this era but that's a project for another time.

Here are the four sculpts in a line formation to give you an idea of how they look when completed.

Lastly here are some Irregular HR43 Polish Cavalry. They come with a mix of Round and Almond shields and since I wanted to use them for 1200 AD onwards I had to cut off the round shields and replace them with suitably shaped shields from my spares box.You can just make out the castings with the replacement shields in the second rank. 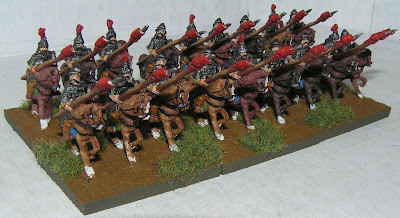 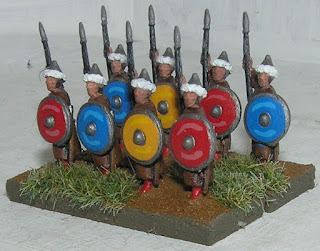