There are ten entrants this year which is two more than last year.
DBM v3.3 400 AP Single List using either the DBM or DBMM 2nd edition army lists.
32-0 Scoring System

Having spent a long time getting them painted I never used them so decided that rather than just gather dust they are going. Details as follows:

FOG/DBM/DBMM/ADLG 8 x 15mm Mobile Baggage Camel Elements - Dromedary
Eight brand new Mobile Baggage Camel elements suitable for a vast number of armies across Africa, the Middle East, India and Asia where they didn't use camels with two humps [the Bactrian breed]. They are a mix of mostly Museum Miniatures with some Irregular castings added in for variety and some smaller animals and civilians whose make I cannot remember. Lots of armies would use camel trains in places where horses would not survive long enough to feed the army.

Texture based, static grassed, sprayed varnished sealed and Magnabased.
New and unused as they are surplus to requirements.
They are all undamaged and brand new on 40mm x 40mm MDF bases 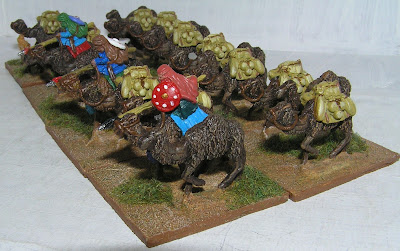 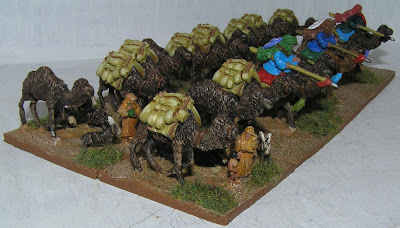 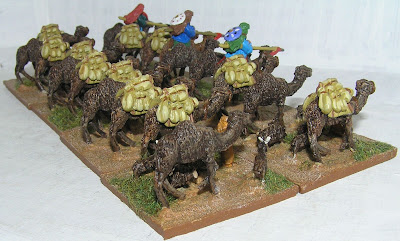 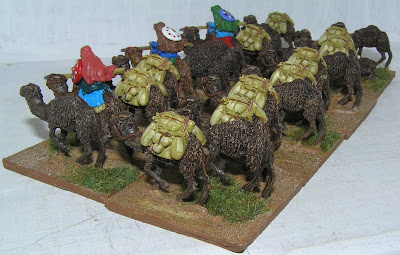 After completing most of my major projects since 2012 I now have a limited amount of 15mm bits left over to finish.  Part of this involved my morphing my West Frank Norman army in to Eastern Franks. I have done the Feudal German commander but I needed to make up the Edward the Confessor contingent. Luckily I still have bits left over and I only needed to create four elements of Irr Bd S including King Edward.  They are a mix of Essex castings and a few unknown ones. 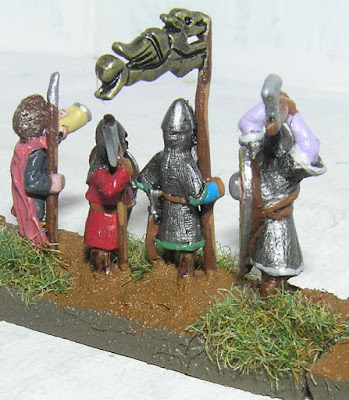 As part of the PLM I am also rebasing odd elements and refreshing them and using up odd figures along the way. I needed to make fresh looking Frankish generals using mostly Essex castings and I have found four castings from an unknown make that made up a nice charging element. I had a spare banner left over so made the CinC element with two banners so he clearly stands out.

Having completed my Later Muslim Indian army in August I had a few left over figures which I painted up to create a few more odd element. I made two Spearmen auxilia elements and six Bow armed Psiloi archer elements. They are mostly spare and might end up on EBay but are also useful to use in a smaller command when I need different looking elements to ensure I dont get commands mixed up. The are all Essex castings.

Finally I saw a resincast model of the Acropolis on EBay. I bid and won. Unfortunately it turned up broken due to being badly packed. All of the resin columns had sheared off. I spent three hours cleaning off the resincast, removing all the remains of the columns and drilling out their centres to replace them. I put metal columns on each corner and glued the roof onto the base. I used plastirod for the other columns and flexed them into their holes and glued them into position. After two coats of undercoat and a very light grey paint with a grey wash I got what I thought was a nice stone effect. The roof is terracota tiles with orange highlights. The model is 11cm long by 7cm wide and came in two sections and is ideal to use as a Built Up Area. I based it on a 12cm x 8cm which is exactly the same size as six DBx baggage elements so will double up as typical Greek, Macedonian and Roman style building cum army baggage. The resincast has the brand name Pegasus cast onto it but I have not managed to find a supplier anywhere on line. All in all it took five hours of work to get finished but I am very pleased with how it turned out. 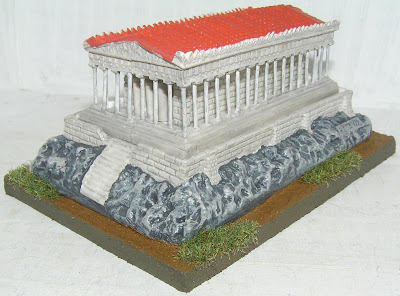 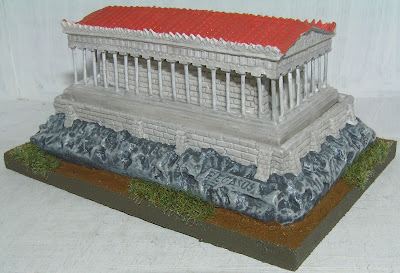 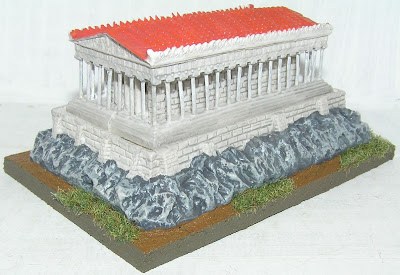 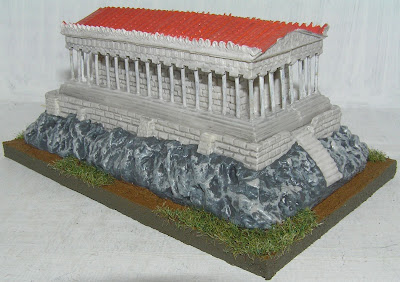 I wa asked to paint up these 15mm scale Legio Heroica Patrician Roman Cavalry recently. Only a small batch of figures and I didn't even need to base them which is always a bonus.

They are lovely casings even though they are a bugger to glue together even when using Boat Builders Professional Superglue. 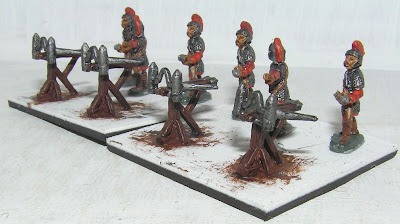