Another Small Commission from PLM

Are part of Project Lead Mountain I still have lots of bits and pieces left to paint when I get round to it. I bought a batch of Minifigs ZE11 castings off EBay with a view to paint and sell them on to make some money. The castings are very old by today's standards and were cleanly cast with minimal flash or mold lines to remove. They are going into someones army to use as part of an allied contingent as since they have their own basing technique they were supplied unbased. Being camelry basings with swords rather than bows they will be used to make Irr Cm O elements. I only had 12 castings which was just the number of castings wanted for their army. 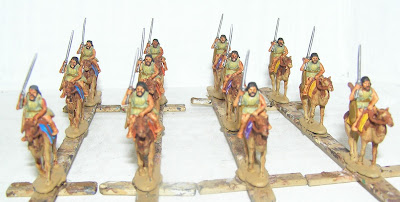 After the success of the 2017 DBM tournament it was decided to run it again for 2018. It is down to the winner to have the option to run the next years tournament as the price of winning or to find a substitute to run it. John Davis asked me to run this years tournament and after putting out the word we ended up with 12 entrants this year which is two more than 2017.

I decided that we would replicate the format from 2017 which is less onerous than other formats that have been tried in the past. The tournament will consist of four rounds and each player submitted a single army list of 400 AP using either the DBM2 or DBMM 2 [Revised] army lists. Since the players do not know what the other entrants are using except me me I got my list checked by John Graham-Leigh of the DBM SWDL along with a BYE Army list just in case we ended up with odd numbers for any reason. As was customary since I checked their lists each of my opponents will be sent a copy of my list once the draw for each round is done since I already know their own army list.

I decided that the first round draw would be done on strict submitted list date order. Subsequent rounds would be decided on results using the 32-0 BHGS Score System taking account of any players who had already played each other and adjusted accordingly.

Here is the list of the Runners and Riders along with the BYE army I had chosen. Had Brian not been a late entry the BYE army would have played John Davis and everyone else been bumped up a slot against the next opponent.

The selection of armies is a reflection of what players own and their own personal playing styles and as is usual is mostly chosen from list books 2 and 4. Each pair of players above are now the first round draw games and they each have to arrange their own game schedule and the Essex Warriors meeting dates is reproduced below to aid them. The round dates are provisional as I will roll into the subsequent round any left over dates to allow for early completion of each round if possible.