Back in 2013 I ordered some of Peter Pigs Tuaregs from their range 0303 to make up an allied contingent to go with my other Arab armies. Despite it being ready to use I still have not ever played a game with them! The figures required some cleaning up and assembly. See http://www.peterpig.co.uk/ancients.html I ordered a mix of codes 03031, 03032 & 03033.

The large shields were all separate which means you can get some variety with a limited number of figures. I decided to take the army list notes literally and they were the famed milky white colour. I also have a ton of other camels from Irregular painted with brown hides to act as troops for the LPIA army and as mounts for infantry if needed. The one thing that really annoys me about the LPIA list is that all of their generals are mounted on horses which means that operationally you cant move though dunes using a small command due to the adverse effect dunes have on horses in DBx.

I could field a Tuareg army by using all of the camels but have never felt brave enough to try it!

Here are two pictures of the finished Tuaregs which are now four years old and have never left their storage box to fight. One day maybe?

I spotted a bargain on EBay last week and whilst I knew better I bought them. I paid a total of £28-30 for 6 x 15MDV Nobles Tents, 1 x 1 x 15RNS Nobles Pavilion, 1 x LGS1 Ancient Supplies, 1 x LGS2 Generic Supplies & 1 x 15WFN Wattle Fence. The retail from Baueda for then all is €36-00 which converts to £30-47 plus delivery. So whilst I got a bargain I still ended up with so more items I dont know what to do with at the moment. I already have one of each of the LGS 1 & 2 packs meaning I now have four of them spare. I will be keeping the Wattle pack and will use it to create Temporary Fortifications for Dark Age and Early Feudal armies in due course.

I really like the Baueda range of baggage items [see http://www.baueda.com/index.html ] and I had been thinking of replacing my current medieval baggage with new elements. I have just completed them and have put them in the baggage box in lieu of the older items I had. Whilst they are clean resincast items with minimal flash they take a steady hand to paint them well enough to avoid you ending up with a messy looking set of tents.

The replaced baggage elements are now on EBay as they are surplus to my needs and they will offset the cost of the new tents despite their being Baueda castings. [Pictures below]. I guess that sometimes I am just a bit too picky for my own good as theres nothing wrong with them really.
The EBay link is here:
http://www.ebay.co.uk/itm/192107489673?ssPageName=STRK:MESELX:IT&_trksid=p3984.m1555.l2649

Decided To Have A Bit Of A Clear Out On EBay!

With new things to paint in the pipeline and Project Lead Mountain reaching the stage where I have completed about 90% of the things I want to keep and the remainder left being things to sell I had a look through the storage boxes for things I no longer want to keep and have put a load of lots on EBay. Its all 15mm scale.

My EBay seller name is DYSON690

Currently I have the following lots on sale.

On 5th January 2017 Baueda finally announced that the pre-production one piece Italian Tower was available to pre-order. See http://www.baueda.com/15medieval.html#10TOW to order. Please note I am not connected to Baueda in any way. Since I have a few Italian Medieval army options I knew I had to have one, but I ordered two because I was unsure if I would want two and I can experiment in how I painted them. I already have two JR Mini's Italian towers which I have previously blogged so decided that I would paint one of the towers to match these. See here for that blog entry http://drewjarman.blogspot.co.uk/2016/08/jr-miniatures-italian-medieval-tower.html

Anyway back to the Baueda review. I ordered the towers and some other items and waited for them to arrive getting on with other painting items in the mean time. About a week later the towers etc turned up, their usual excellent service.

As with all resincast items they needed some cleaning up but because I ordered some of the first out of the moulds they were very crisp with very little problem areas. A quick clean up of air bubbles and a good wash in washing up liquid and a toothbrush had them prepared for painting. I then put them aside whilst I cleared other items off the workbench.

It wasnt until yesterday that I was finally able to make a start on the towers having black undercoated them last week during some down time when I was waiting for other painted items to dry.

The towers fit onto a 40mm x 40mm base with no problems and the flared top means that you can also easily fit in a 40mm c 40mm based element of artillery or anything else that takes your fancy.

The tower dimensions are [excluding my own base addition] 49mm wide at the top and 76mm tall [approx]. The brickwork detail lines are quite fine and care must be taken not to lose them when painting the casting. I used a watered down black undercoat and coated it twice. On the Baueda website he used a stone tower finish and I did comment to him that I thought that red brick would be more historically accurate. Since the tower isn't based on any particular real life tower but a composition creation [AFAIK] for wargames use I Googled for images for ideas and drew inspiration from the towers in Lucca, Lazise, Piedmont, Brisighella, Florence and Torgiano.

I painted the other tower a slightly different way to mirror other towers I have seen pictures of and to give them a larger proportion of visible corner stones in a limestone colour.

The tower took me about three hours to paint in all with drying times taking into account and another 15 minutes to hand varnish to protect it. I am very pleased with the final effect of the tower and recommend that no Italian army or combat in Italy from the 12th Century onwards would be complete without at least one tower!

Pictures of the second tower are now after the first tower. 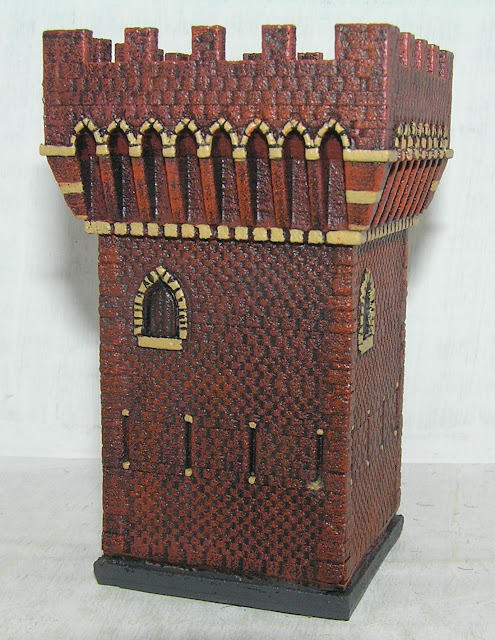 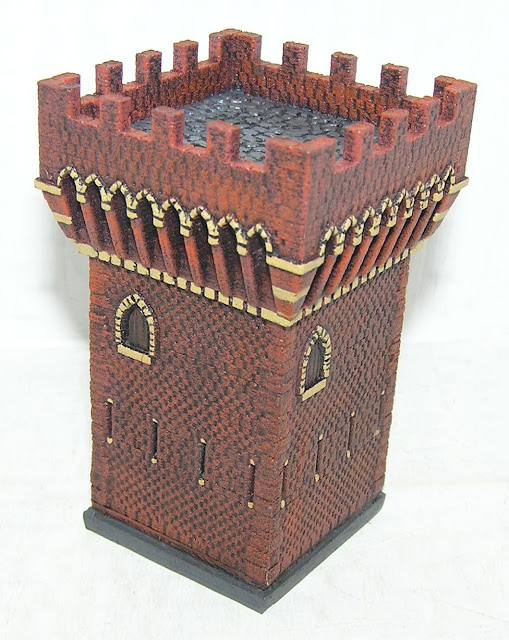 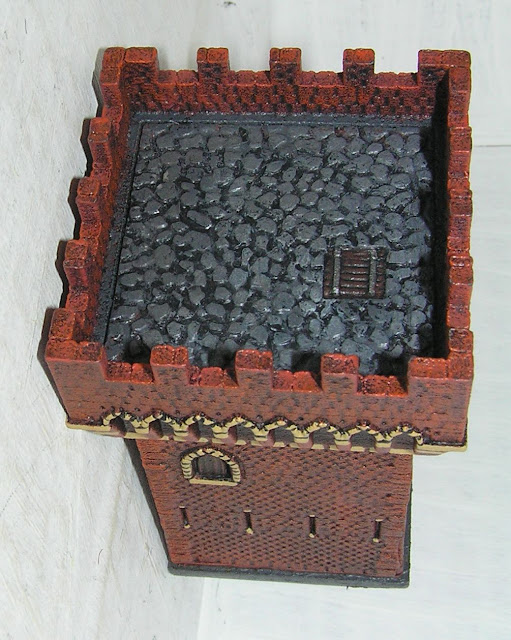 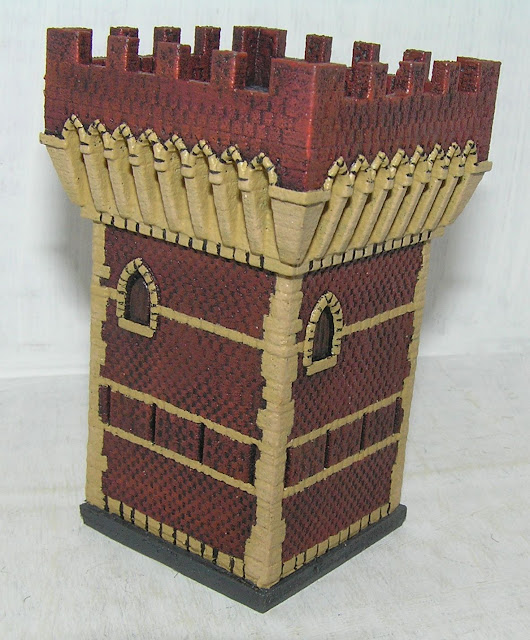 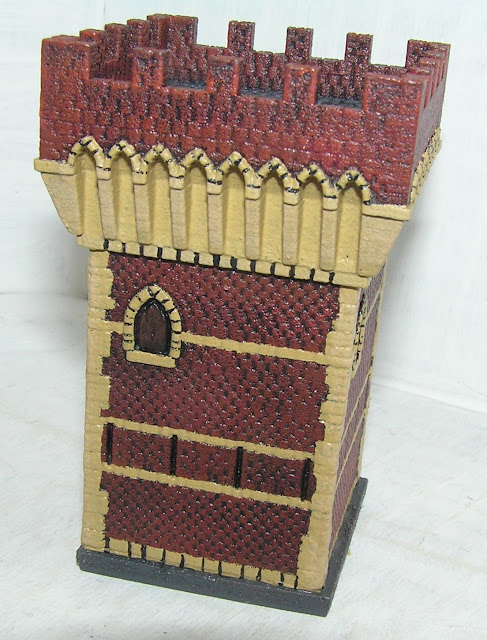 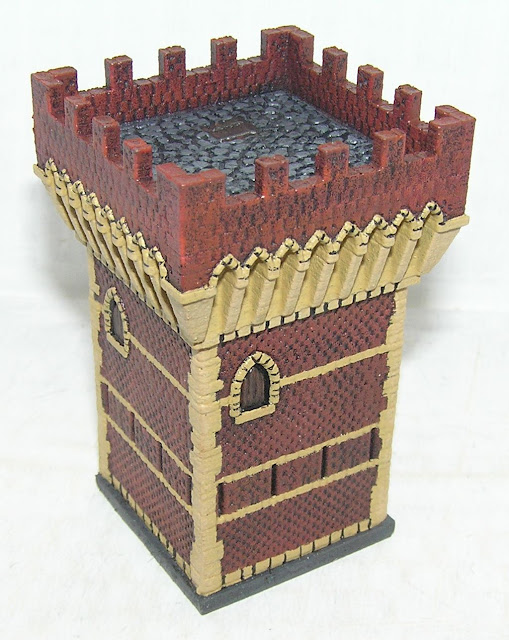 Baueda makes lots of excellent resincast tents, buildings, accessories and now metal figures. I am a sucker for a nice piece of baggage and have far too many pieces already but I decided that I just needed a few more for variety! So I ordered four more to add to my own collection to enable me to create a set of six similar elements. I personally prefer immobile baggage elements so am happy to buy tents. I already had a pair of the Greek Tents so ordered two of the Ottoman and two of the Persian tents as the name on the bag is only a guide! see http://www.baueda.com/ for their website.

Below are the finished items. I used a Linen colour and a Chestnut wash to give them a dirty look. Being resin they need a good wash using domestic washing up liquid to give the surface a clean finish so the undercoat takes proper hold. I finished them off using Plasticote Spray Matt Sealer which should give them a good protective coat for many years.

If I need more than six elements I can easily just use some of the other elements I have in my collection.

Way back under DBM v1.1 I purchased a Norman Army for 1066 AD. One of the ideas was for it to morph into Eastern Franks. The last two years of Project Lead Mountain saw me clearing more figures from the unpainted pile at a ration of four to one. I have also been buying new figures but the amount of unpainted metal is now down to the state that its all bits and pieces with a few exceptions and none of it is of any use to allow me to morph an existing army into something new.

Having cast around for suitable mounted kite shielded knights armed with swords I settled on Donnington New Era Normans specifically their http://shop.ancient-modern.co.uk/nmc11-heavy-cavalryman-2918-p.asp castings. I emailed Damian and asked him if he could make sure I got 24 of each casting and selected 24 each of the HH01, HH02 & HH03 mounts for variety. I am unsure if I will ever use 24 Irr Kn I Swabian Knights but they will double up as other Milites from this era so wont go to waste. I am very pleased with how they turned out. It took be about two months to do them all because I also had other things on the go at the same time and I hate painting huge batched of identical castings if I can avoid it. The mounts required some fine cleaning up of flash as did the riders. The figures came with separate kite shields which were a bit of a pain to glue on to the figures. This of course means that these casting are also perfectly suitable for other similarly armed knights from the Dark Ages by the simple expedient of using different shaped shields.The castings are full of detail and they paint up really well.

So now I have 24 elements of Irr Kn I in my collection which can double up for other knights if necessary. 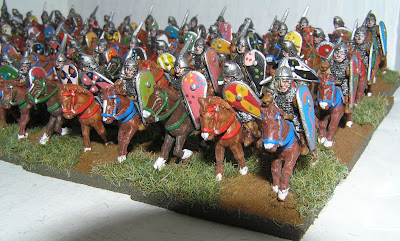 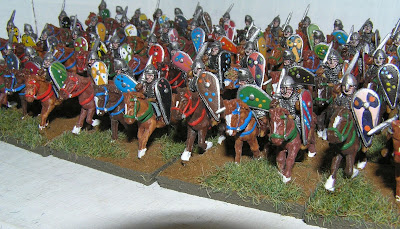 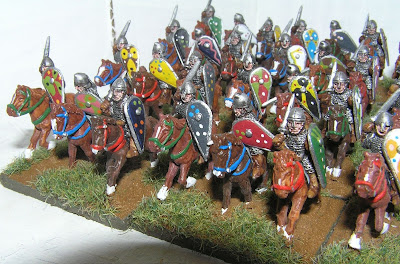 One of the club mates wanted to try out his new "pseudo" Medieval Vietnamese army today.

He threw together all and sundry to put the army on the table and if you didn't look too closely at least it was based correctly. I don't have any far eastern armies and since I am still gaining experience with my Later Muslim Indian army I said I would use this again. We used 400 AP and DBM v3.3 rules. We both were Ag 2 and I rolled 5 to Bob's 3 meaning I invaded. Since I have some naval elements I choose to dice for a Waterway, which I got. There was no weather effect. Upon reflection I should have waited until the third terrain phase rather than use the Waterway.

To break the army I only needed to break two commands and an odd element but it wasn't to be. Despite a series of poor combat throws I eventually managed to take down 13 EE from his army but they were spread over all four commands. I had a bad run of combat dice which lost me the right flank command and a double overlapped Irr Bw I died the next bound to break the second command and with it the whole army. The final score was 10 - 0 to Bob which converted to 30 - 2 BHGS.

I wasn't too upset to lose as I need to gain more skill coordinating this army.  I did feel a bit annoyed that I had two 1's on the trot with my Cav S against his Reg Bw I which was what broke my command as I only needed to equal his score to take out the archers and with it that command.

But you cant win them all! We played for a total of 4 hours 30 minutes until we got a final result.

I think his list wasn't best organised due to the lack of any cavalry and four equal sized commands but we each play our own game style.

My army sits in the box ready and waiting for the next game.

Here are a series of pictures taken through the game. 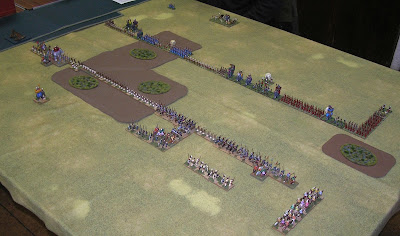 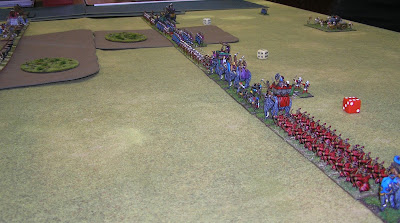 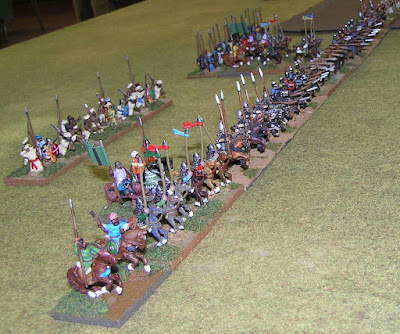 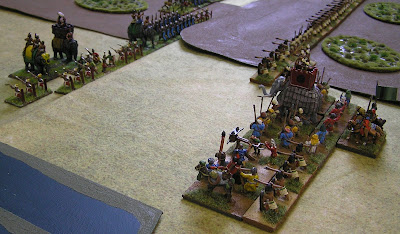 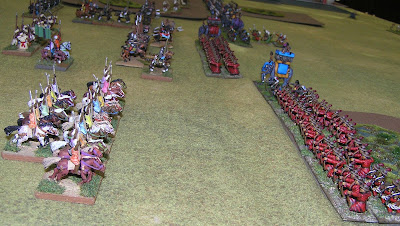 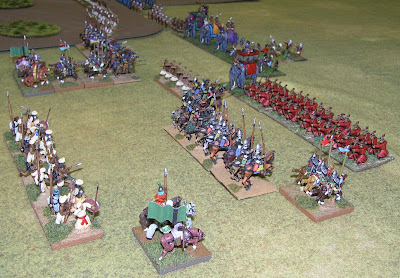 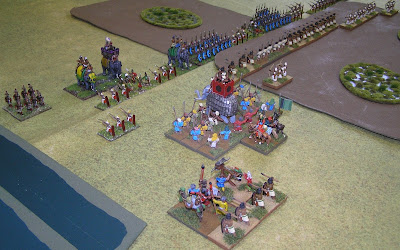 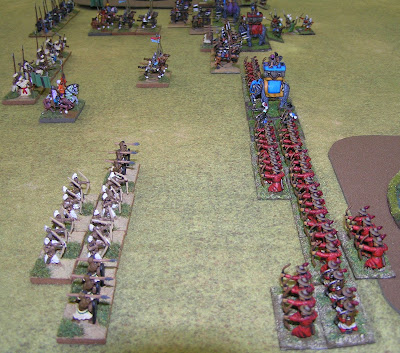 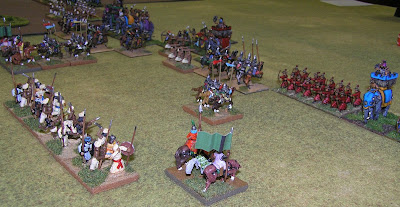 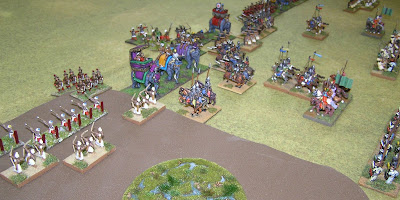 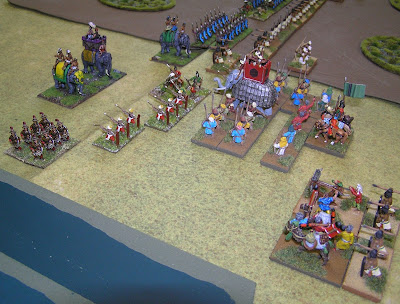 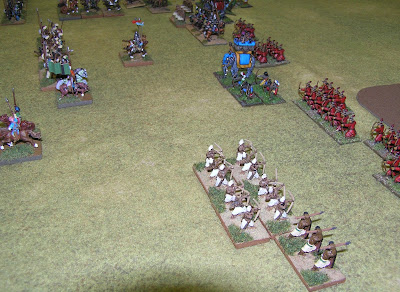 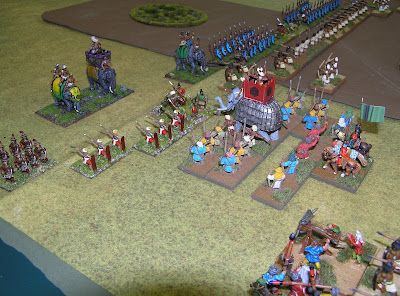 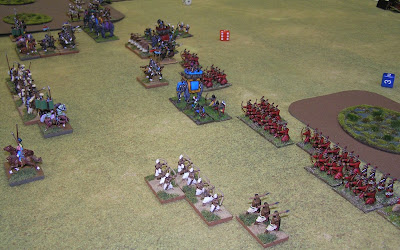 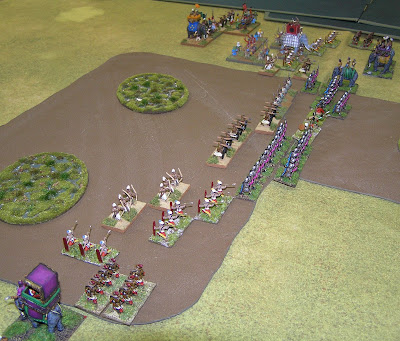 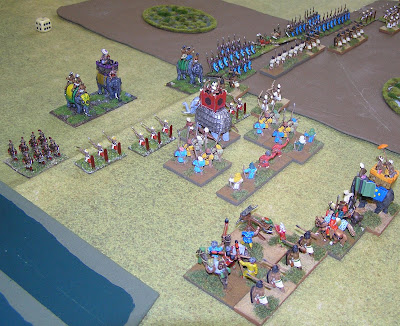