As part of my ongoing project to create a Polish army my next installment of the army is their warwagons and skirmishing handgunners. All of the elements are from a Polish company called QR Miniatures [except for the loose pavise which are from Irregular code HR28]
http://www.qrminiatures.pl/index.php?option=com_content&view=article&id=29&Itemid=18

The range is well sculpted, cleaning cast and excellent to paint up. I have lots more of their 13 Years War castings to add to my army.

The warwagons come in pairs, one with horses and the other on a solid base as if parked up overnight. I ordered eight wagons and used the stationary ones as baggage elements as per the previous blog entry for the Polish army project.

I decided to give them lots of crew and provide infantry escorts to make them appear formidable.I finished the sides of the wagons with transfers to give them a national appearance. 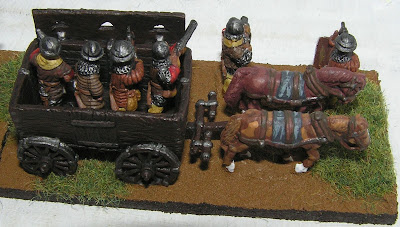 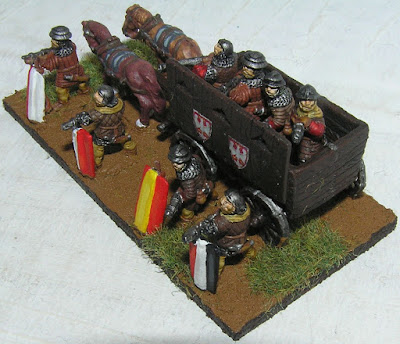 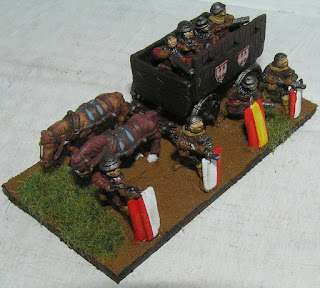 After completing the warwagons I had eight handgunners left over. The army list only required two elements but I decided that I would paint them all up and have two spare elements because otherwise I just end up with random unpainted metal hanging around in my spares box. One of the casting had what we would recognise as a much more modern traditional looking handgun so I put those four castings on the same bases to create Regular looking elements with the other four castings mixed up to create Irregular looking elements.

Yet More Baggage Elements For Sale

Anyscale Models make an interesting range of bits and pieces. I purchased some of their resin cast A profile tents. The objective was to make some baggage elements to sell on EBay to generate some income to fund my incurable Lead Habit. The castings came in plain grey finish and were quite clean with minimal air bubbles which can plague poorer made low quality resin product.

As with all my painting projects these were for use with 15mm scale armies.

I mounted them on 40mm x 40mm MDF bases, completed with magnetic sheeting underneath, finished off with Vallejo Texture Paste, various tufts and spray sealed with a matt varnish sealer.

I have completed two batches so far in different styles and plan to do another two later this year.

Scythian Archers - Or How I wasted 3 Weeks Of My Life

Because I am using Xyston castings for my Scythian infantry I ended up with some of the best designed and sculpted castings on the market. The Scythians are a colourful lot and their clothing has lots of contrasting trim, a mix of either fur or cloth stripes. I had a total of 72 castings to paint and the colour mix meant that there was a lot of mixing and matching of paints as I worked through them. I started to get bored painting them and kept getting distracted during August painting other things or working on small commissions which meant they seemed to drag out. In the end it took me a total of 21 days to complete these figures. As is usual Xyston castings are mostly clean and required minimal cleaning up before painting could begin. The DBMM army list allows you to use a maximum of 24 elements of Bw archers. They are a perfect fit with the other infantry I have already blogged. I still have eighteen elements of Hordes to complete which totals another 90 castings but I am going to take a break from painting Scythians for a while as I can use other Hd elements as a quick fix substitute if necessary whilst I work on a different army. 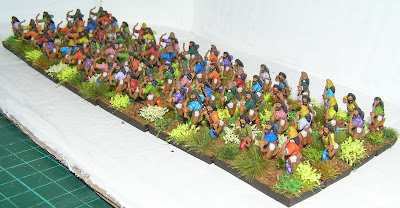 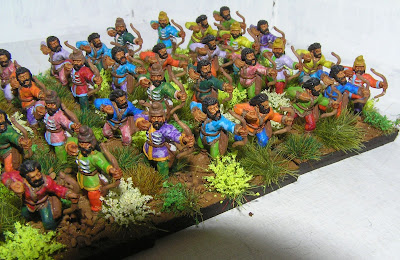 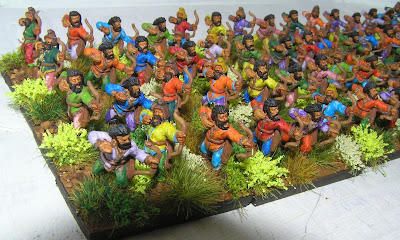 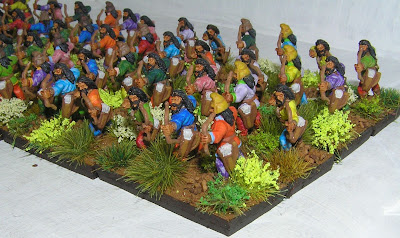 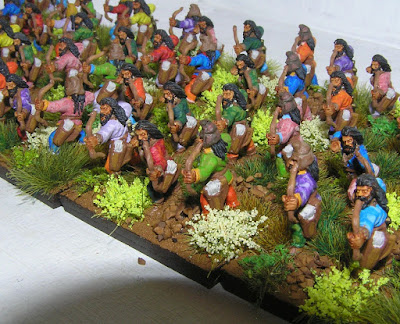 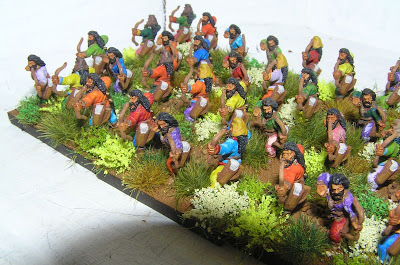 Angry Peasants - When That EBay Bargain Wasn't Such A Bargain!

That Sinking Feeling When That EBay Bargain Turns Up!

"Caveat Emptor"
When you spot that good deal on EBay and think that its only going to need a little tidying up to make them look OK on the table top.

The listing was totally honest and the pictures clear so I cannot claim I was misled in the slightest. They were well packed and arrived intact. Being second hand and fairly old I expected some damage and to my surprise only found two figures were broken, missing their weapons. I easily repaired these in 15 minutes so no harm there. I thought I could freshen up the bases but it turned out they were a mix of materials which had warped over time and were covered in old railway style flocking. So I ended up having to remove all 100 peasants from their 20 bases. The wagons were a different problem, they were fine out of the box except for the fact they were on very odd sized bases meaning that they were useless in their current form. So off with their bases for them too.

Here are the pictures taken from the EBay listing to give you an idea what I bought. For some players I am sure they would have been happy to use them as is and perhaps I was being too fussy. 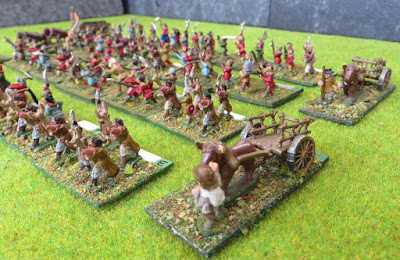 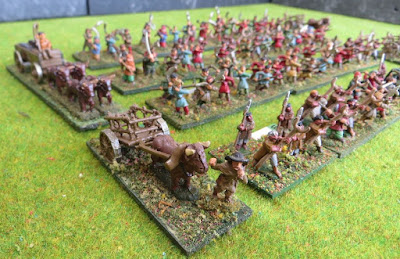 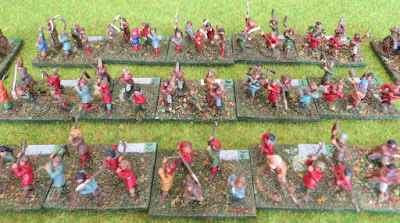 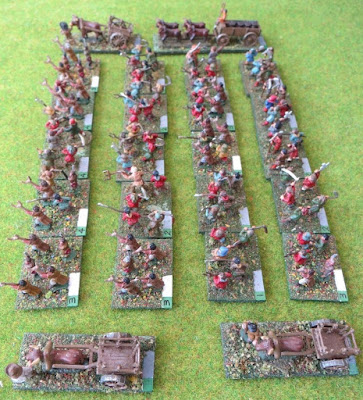 So the refurbishing began in earnest, first up are the wagons. I must admit I had always intended to refresh the wagons and resell them on to offset some of my initial outlay. There were four wagons of an unknown make. One of the wagens is fully laden and too long to fit on a standard 40mm x 40mm baggage base so it ended up as a double sized baggage element. It OK on its new base, much to my surprise. 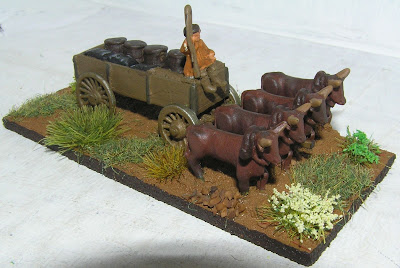 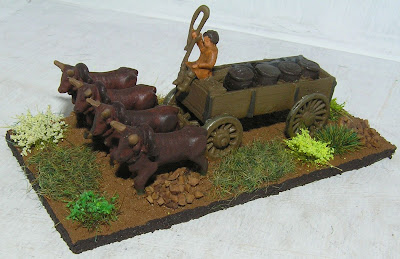 Each of the three smaller wagons were a perfect fit on a standard 40mm x 40mm baggage base and again the end result looks OK.

All of the wagons are now listed on EBay.

The 100 mixed peasants were a different problem. There were a few mixed makes in the lot and I knew that I had to be careful how I rebased them to make sure they didn't look odd. First thing I noticed was that I had nine shieldless javelinmen. I realised that these would be perfect to create three more Irr Ax X to go into my Welsh Army, so RESULT no harm done there and an easy win. 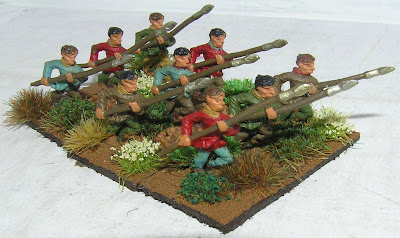 Having culled nine castings from the original batch I knew I was now short of some figures to make up twenty Horde elements. I had four spare leftover painted peasants from when I had reused them to make up some Auxilia for use in my Catalan Company army. In the end I managed to create sixteen Irr Hd O elements using a total of 80+9 castings out of the 104 I eventually had available. This means I had 15 leftover castings which have gone into the spares draw along with some other peasant castings. Whilst I was rebasing the castings a mate from the club casually mentioned that he needed four elements of Irr Hd O for his Feudal English army, this was after I had part based all the figures. He normally bases his own figures so they all match and I was lucky enough to have been able to sell him these elements part based. I made four batches, each of four elements to ensure each batch had a decent figure mix.

Here are some pictures of each batch which will probably all end up back on EBay to enable me to recoup some of what I spent on buying them in the first place. Hopefully I might even make a profit? 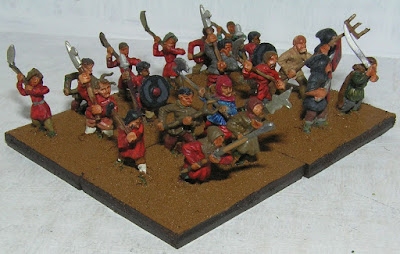 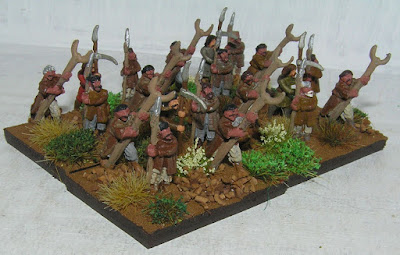 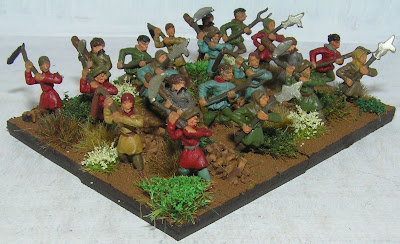 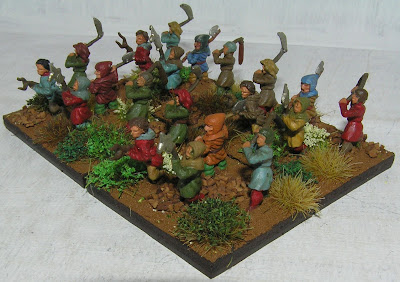