Finally Have An Ancient Spanish Ally After 20 Years

As with every wargamer I purchased figures with a view to providing an ally for this or that army. Time flew by and after 20 years and having cleared out two box files of metal I am now left finishing off the last bits and pieces to complete long forgotten projects.

I purchased some old painted 15mm Minifigs Z81 Spanish Scutarii in a Bring and Buy. They were not that well painted and some figures had broken javelins. I also obtained five Z81 that were unpainted as part of a job lot of Classical Era Macedonian & Punic War left overs.

Well I painted up the five figures to match the others, smartened them all up and rebased them. Below is the final result and I must say I very happy how they turned out. Can you spot the new figures from the old ones?

Below are the pictures of the various elements. 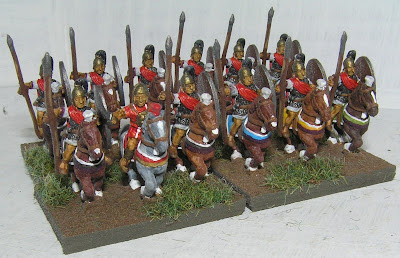 I addition to this I painted up an odd Donningtons Numidian Elephant I have had laying around for a similar amount of time as well as finally finishing off the last three elements of Marian Roman Generals elements I had part done to replace the original elements I have now sold on. I also rebased up some of the Marians/Polybian mounted I had as their bases were very tired and they needed freshening up. Lastly I scratched a Numidian Memorial Tomb to use with my Numidian Army as a baggage element as I was one short. 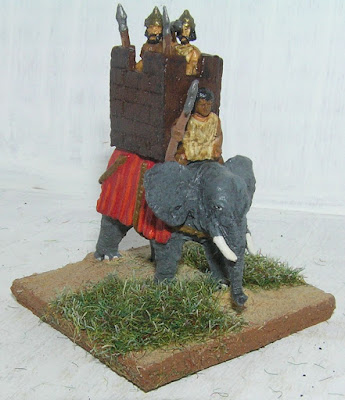 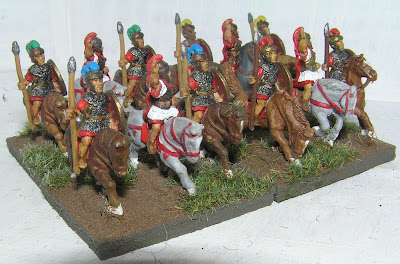 Bob M from Essex Warriors fancied a game so I suggested something larger to take advantage of our 7 hour gaming Sunday. We agreed to a historic matchup and ended up with my Iceni army Bk 3/43 Samanids fighting his Bk 3/15 Tibetans.

The Tibetan army is usually very small even at 500AP due to the expensive Reg Kn X it uses. He took a Bk 3/08 Khotanese ally contingent using the Irr Kn F troop option.

Bob was the invader and placed no terrain. I placed three areas of brushy RGo which fell in the flank sectors two of which made it perfect for me to anchor my army against. It meant my Buyid ally was left with nothing much to do but it prevented Bob from moving his Cataphracts over to his centre in case I suddenly pushed forward to try and loot his baggage. Bobs ally was reliable and after Bob pushed forward very hard in his first bound I ended up PIP starved with a 2 for my ally and 1's and a 2 for my Samanids which sort of depressed me thinking that I might have broken the cycle of bad luck I had at Caesaromagus. I pushed my elephant forward into the gap I had left for it with 2 pips and attempted to mitigate Bobs first move.

Casualties were fairly even at first but because my two largest commands were larger than his entire army I could afford to absorb any losses whilst I hoped for the breakthrough I needed to exploit my superior numbers. I killed one of his sub generals early on due to a lucky situation of my being able to attack one of his Khotan Irr Kn F with my armoured spearmen whilst it was double overlapped and due to his not having enough PIP's the previous bound I was able to double it to kill it and his generals element due to the lack of a recoil gap. Once my elephant got into combat his Khotan ally knights started to drop like flies against my double rank rear mitigated Sp O and it quickly broke leaving a huge gap in his line. My sub generals Cv S were taking a pasting from his cataphracts in the centre and I was barely holding out by plugging the gaps my my LH. I was 2.5 elements away from losing my CinC's command with Bob only needing a single loss from his CinC's command to break his army. He threw all his troops back into combat with my Spears, auxilia and hard flanked a lone LH F with a pair of his own LH F in the hope that he would get lucky and break my command. My Spearmen held on and recoiled his cataphracts whilst I rolled a 6 to his 1 in the LH F combat to kill his LH F and break his army.

The final result was 10-0 which converted to 30-2 using the BHGS scoring system. The score doesn't really show how close the battle was.

It was a fun game and I think Bob learnt a couple of things and realised where he had made a couple of mistakes which thankfully he managed to survive due to some good dice rolling.

We discussed his army composition which I thought needed a slight rearrangement. I suggested that instead of taking the Khotan as Irr Kn F with all that involves keeping them under control or moving to a better location that he might have been better taking the Irr Cv S version in his already knight rich army. It would have probably been slightly better if he had also taken it as a purely mounted ally, slightly smaller and saved the AP to bulk out the Tibetans a bit more. I also suggested that he might have been better served using the third Tibetan command as more of a PIP dump by making it a bit smaller and putting the Ps O with it to hold some RGo and making the other two commands a bit larger to increase their BP by 1 or more.

Below are a selection of pictures at deployment and a few taking through the game and the situation at the end when the Tibetans had broken. 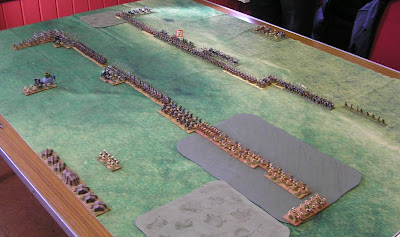 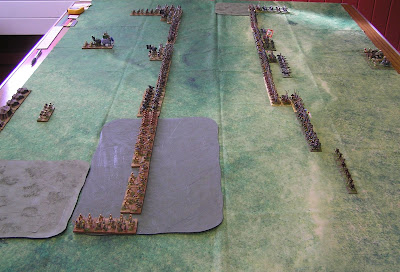 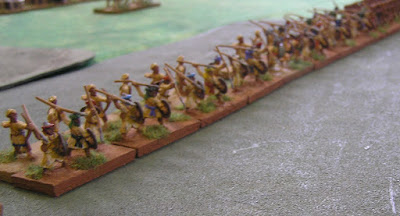 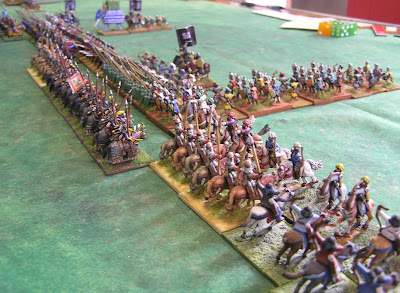 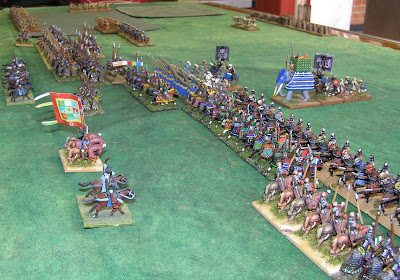 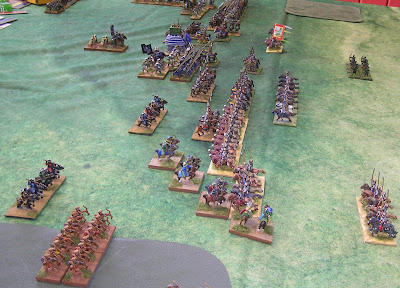 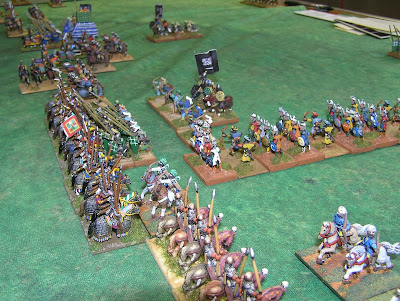 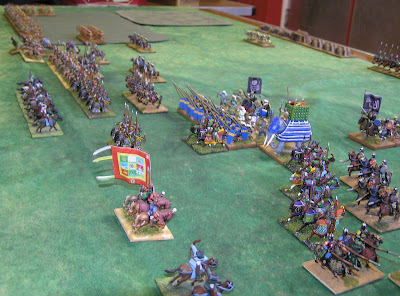 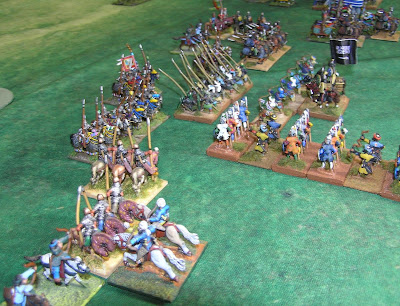 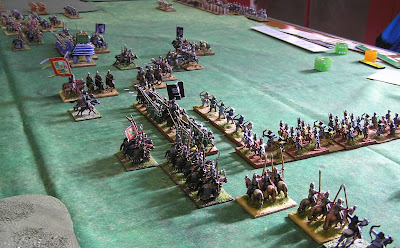 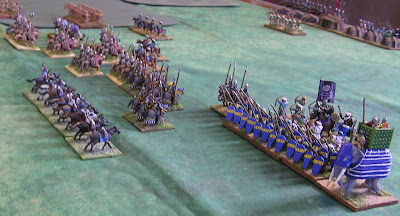 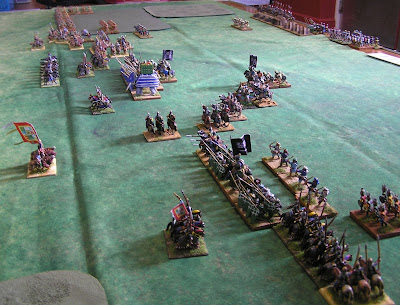 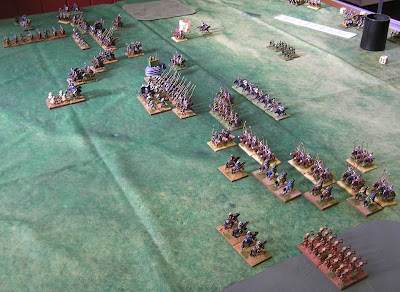 A Rematch that's closer than the score line suggested.

Peter K asked me for a DBM 400 AP rematch today because he wanted to try out another idea for his Italo-Ostrogoths. I had played him back in May this year [see blog] so used the same list I had written before as I was too tired to try and craft a new list after Caesaromagus.

I turned out to be the invader and most of the terrain was on my side of the table and my Command 3 was unreliable for the first few bounds.

Peter attacked my left flank and eventually broke my command 4 after a few bounds of combat.
I pushed forward my centre and started to close his Irr Bw I with my Ax but lost a quick casualty to a 6-1 as usual. I then ended up with what seemed like three bounds where I could not extricate my LH and he managed to quickly despatch them with his CinC's small group of knights. In the mean time I was punching through his inferior bowmen and had broken his CinC's command but due to another turn with no PIP's my auxilia started to charge his demoralise bowmen and I had a single Ax S fighting against them whilst overlapped. Of course this meant I got the inevitable 6-1 roll against me to lose the stray auxilia and this demoralised my CinC's command but not the army. It was only a matter of time before I broke as I was only two elements away from losing whilst I still needed to get another six from Peters army.The end result was 7-3 to Peter K which equates to a 23-9 BHGS score. This game was quite fun and taxed my skills due to the sort of army I was using. Nine VP in a single game is still three more than I managed in four games last weekend!

Below are some pictures taken due the course of the game. 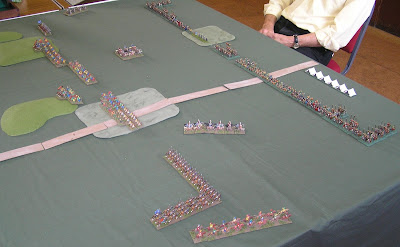 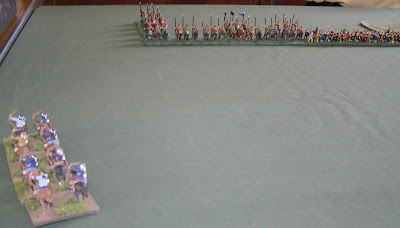 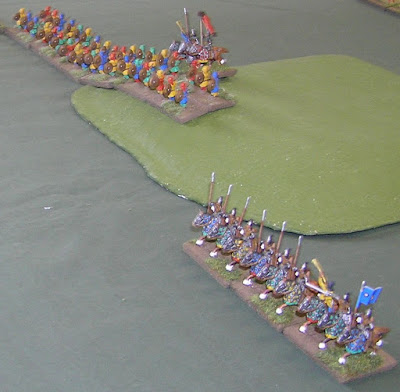 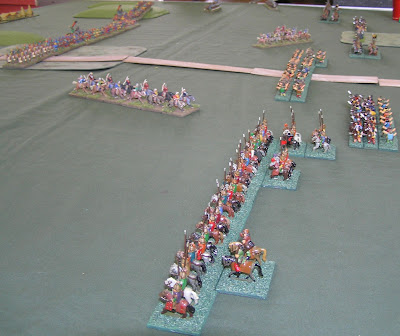 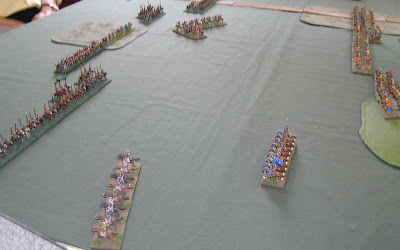 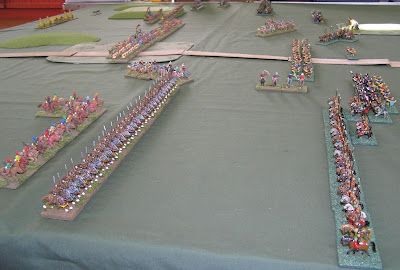 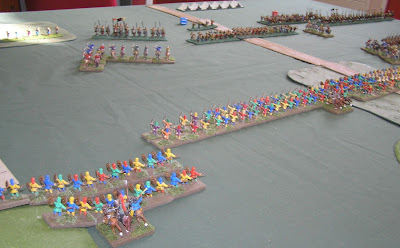 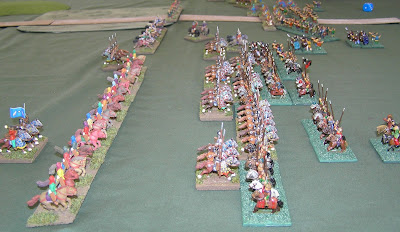 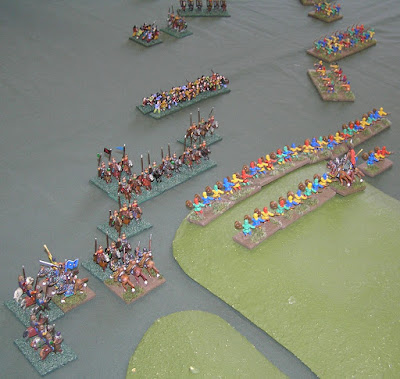 I have refreshed some elements and finally completed the last of the missing Military Order foot that I started back in 1983 but didnt finish off. Completely new basing makes the figures appear painted yesterday.