With this last batch of painting and rebasing I have enough archers to field a South Welsh army and also the Regular Mercenary Archers that appear in the Medieval German and Feudal French lists. I still have over 120 archer figures left to paint but these will all be sold off if I do paint them.

Figures I am keeping:


Figures I am selling off:

Hungarian Light Cavalry for use in my Medieval German Army

Having seen there were two distinctive phases when the Medieval Germans used Hungarian Light Cavalry in their armies I wondered if there was much difference in their dress style. After asking a couple of history sages on the WWW and finding out there was I ended up buying two batches of figures to enable me to field historically accurate looking figures depending on when I chose to date my Medieval Army list from.

The first group are for the 12th Century and I was recommended to buy the following figures:
http://www.blackhat.co.uk/product/fe-14-hungarian-light-cavalry/
They were nicely sculpted castings and painted up nicely.

The second group are for the 13th Century and I was recommended to buy the following figures:
http://www.mirliton.it/index.php?cName=historical-15mm-condottieri Ref CC006 as they were galloping but you can also buy CC005 which are walking. Mirliton figures are also very nice.

Despite grave misgivings about using my Polybian Romans ever since their disastrous result at Roll Call in 2012 and my running over two versions at the Challenge 2015 with my Samanids I decided to try them out again. Peter K is due to play in the DBM Club Tournament Final against Richard G's Middle Imperial Romans on Sunday 20th December so asked me to run out some Romans so he could get in some more practice as it had been a few months since he had used them in anger. We used DBM v3.2 400 AP.

I struggled and struggled to get some sort of viable command structure and decided that I would try out the Pergamene Ally contingent option [P] in the MM version list that allows you use use them as if they were a 4th Reg sub-general.

The four regular dice in theory game me plenty of PIP's to use with at least one command but I still had one bound where I rolled three 2's and a 1! I was PIP starved on a few bounds despite rolling four dice which allowed Peter to redeploy his Nomad ally right across the table width whilst I slowly pushed forward along my entire front line.

The army list has given me a potential building block basis to create a 500 AP list version. If used with v3.3 AP changes, the Irr El I costs 15 AP and the Reg Sp S cost 18 AP giving a net saving of 3 AP. I would then use this to purchase an additional Mercenary Peltast [P] Ref Ps S to go into command 4 and move one of the generic Cretan Archers Reg Ps O into command 3 to maintain the three 18 element command structure. This increases the army Break Point by 0.5 EE and the command 3 Dem level slightly. I would use the additional Ps in command 3 to sit at the back in some RGo near to the camp out of harm's way.

Peter and I played at a leisurely pace which of course means that this army took ages to get a result. I pushed through my elephant over to my far right flank which generated a Mexican standoff and Peter started to fall back as my elephants approached his cataphracts.

My Triarii were the most effective infantry on the day which allows me to knock open a gap in the enemy CinC's line and after my legionaries managed to resist Peters central Cataphract charge when I killed one at the second attempt the mounting losses meant his CinC's command broke and ran. I was slowly chipping off odd elements elsewhere which meant I was only three elements from breaking his army when I spotted that Peter had pushed his Nomad ally generals LH element a bit too far forward which allowed me to get two of my Italian allied cavalry into contact and of course Peter was unlucky and rolled a one meaning his ally general died. In his turn he rolled a 1 meaning his ally broke and with it his entire army.

Here are some pictures of todays game. 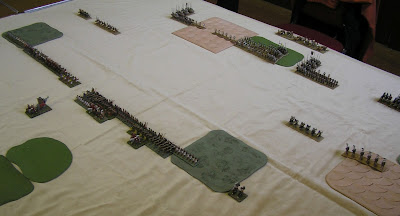 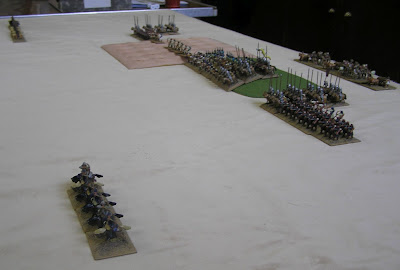 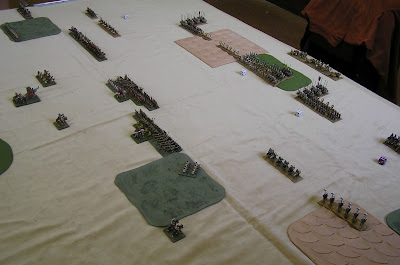 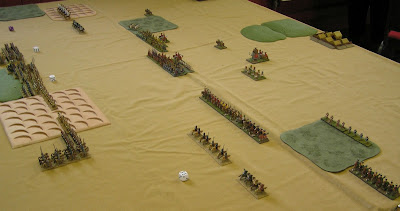 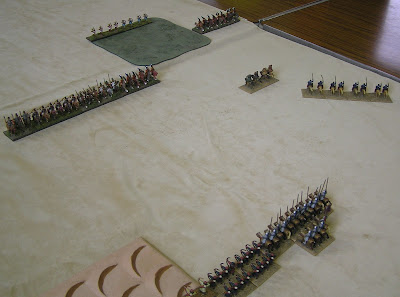 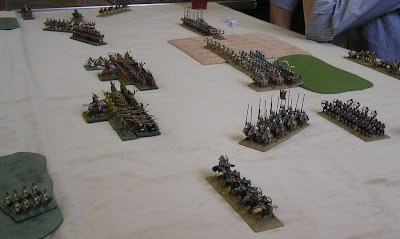 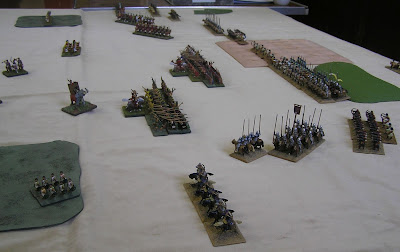 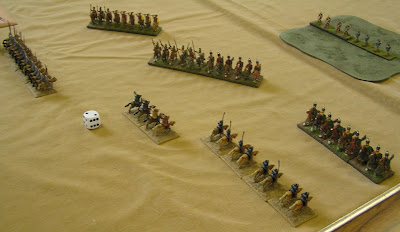 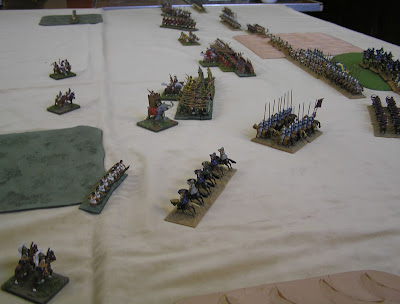 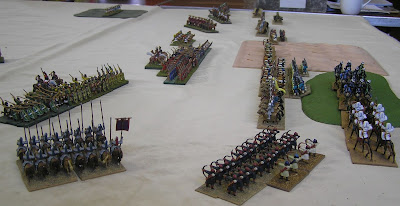 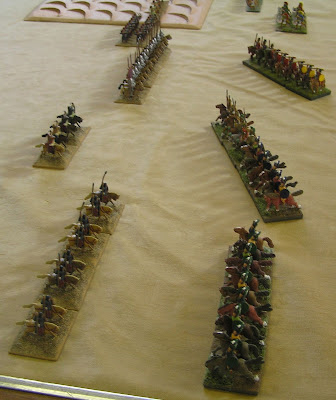 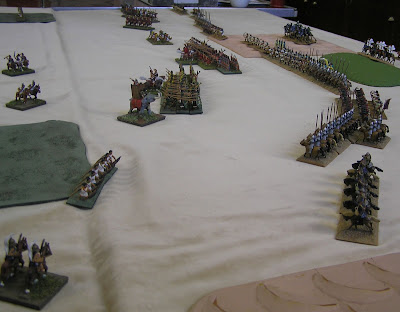 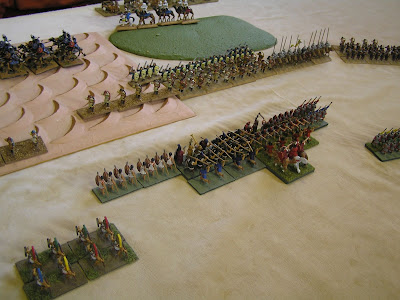 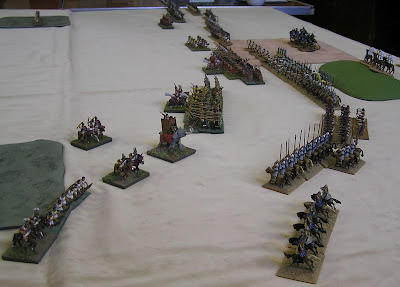 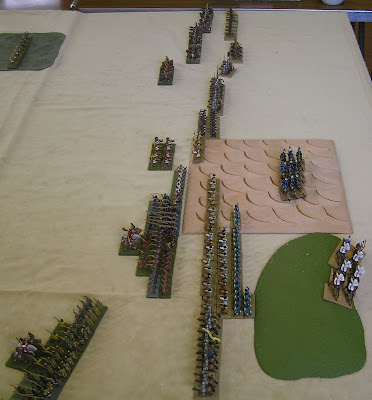 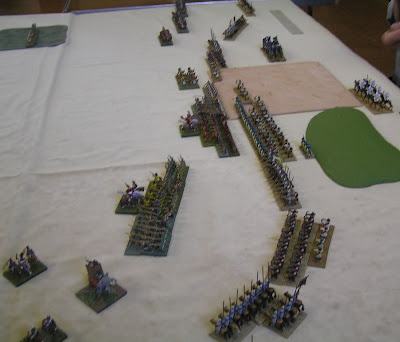 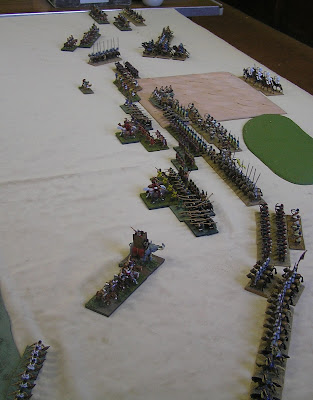 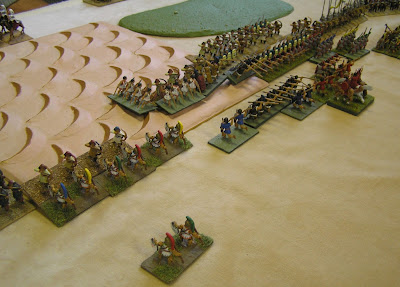 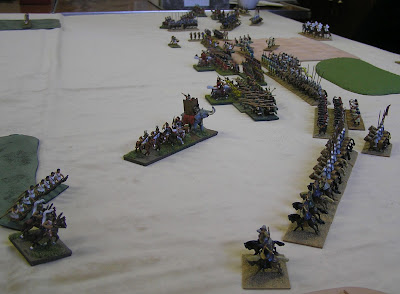 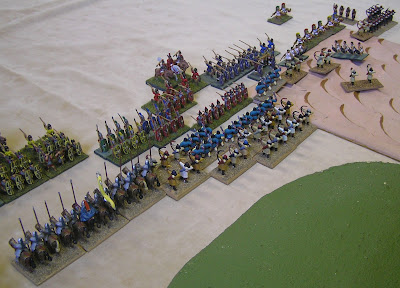 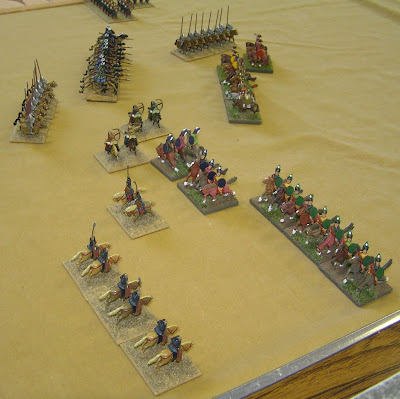 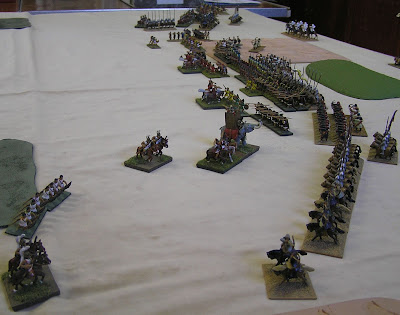 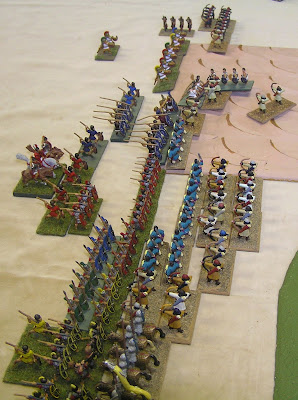 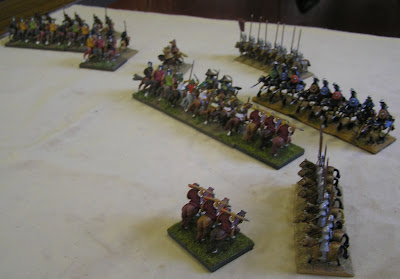 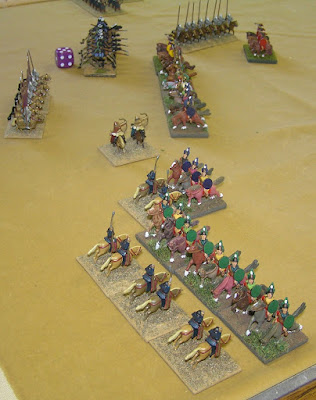 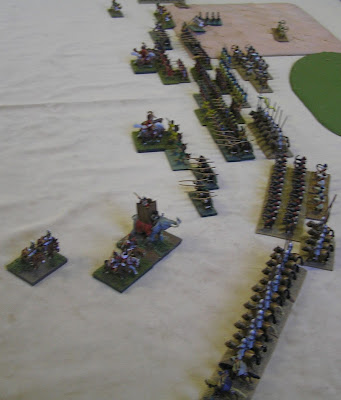 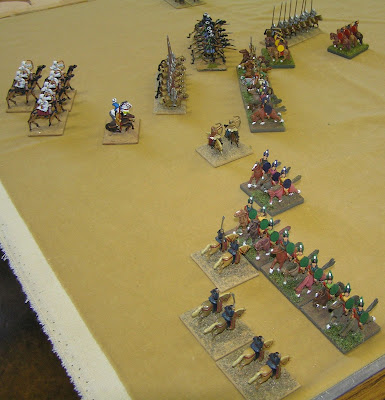 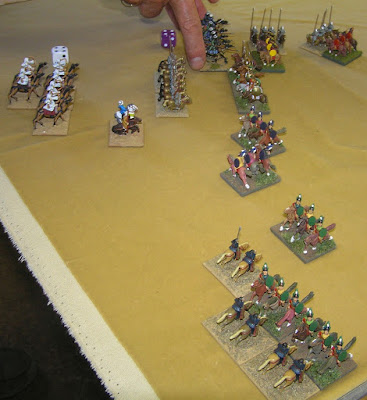 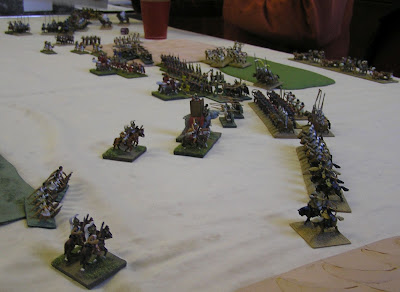