Latest Additions To My Figure Collection

Here are the 24 elements of Irr Hd O I have just finished despite having them in my Project Lead Mountain for about five years. The figures are underfed looking. In all I painted 120 castings, I cannot remember exactly the make of the castings that comprise the group of Clerics. I also had a group of five peasants including the one flashing his bum at the French.

Having completed these finally means I can now field an Early Crusader Army for the 1st Crusade plus there now enough to cover any other Feudal Era army that uses Hordes as a troop type.

In addition to these figures I still have loads of damaged castings for the Graeco-Classical Era in Book 2 of the DBM army lists. After drilling out hands and fixing replacement javelins and also fixing some smaller round shields on some of the figures to make a good match I have ended up with some useful Hill Tribe elements. 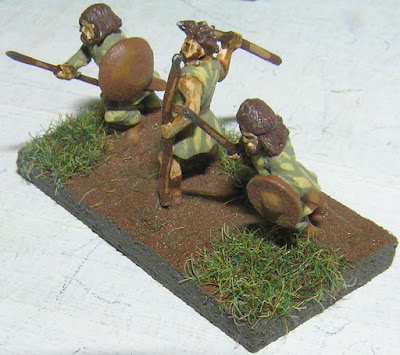 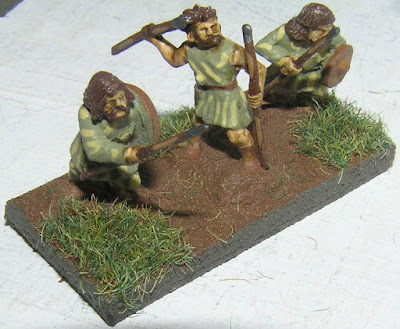 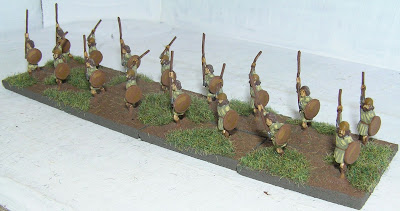 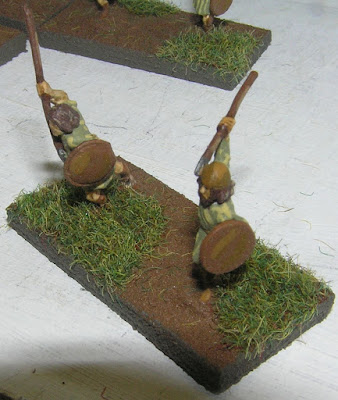 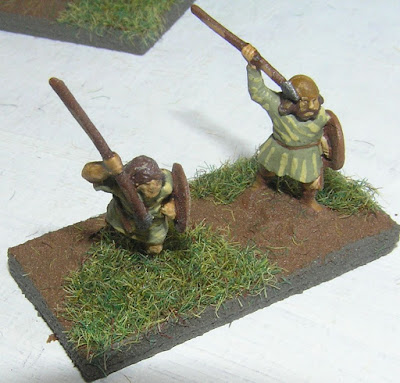 The eight Irr Ps elements were made up by using 8 x Z124 Calabee, Javelin, Helmet, Shield & 8 x Z145 Aetolian or Agrianian Javelinmen. I painted them to match the Paphlagonian Hill Tribes foot so they would both slot into my Attalid Pergamene collection as discrete units. I had originally planned to sell these on EBay but have decided to keep them for now. The clothing is painted to represent poor troops clad in undyed linen and they are armed with basic javelins and most are carrying pain undecorated leather shields.

People often dismiss out of hand older castings such as Minifigs, Donningtons or even Essex but their figure designs often lend themselves to be painted up to represent many different troop types because in a lot of cases their casting code and descriptor is just a guide in my eyes.
Posted by Drew Jarman at 22:42:00 No comments:

Hungarians Late to the Party Plus Refreshed other elements

The Last Two Groups Of Hungarians

I had sixteen left over mounted figures after I painted up the Tartars and after some research managed to work out they would be fine for Ruthenians and Cumans. 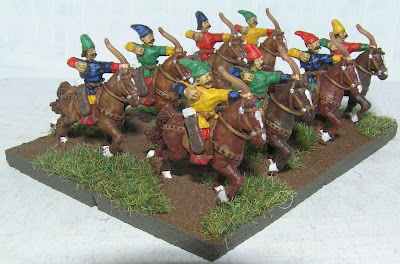 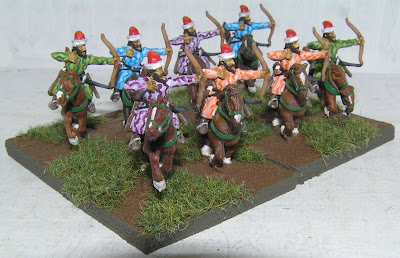 Whilst painting these I looked in the army collection and realised I still needed to refresh and rebase a lot more figures to bring them up to 2016 standards having originally painted them back in the early 1990's. This forced me to have a look through my Feudal collection to realise I have far too many figures in certain categories of troops than I need. I have been slowly selling off surplus figures over the last two years on EBay so now its the turn of the Feudals and Medievals period. The refreshed red lanced knights are not necessary for my collection and despite all the hard work bringing them up to my 2016 standard of presentation will be offered for sale in due course. 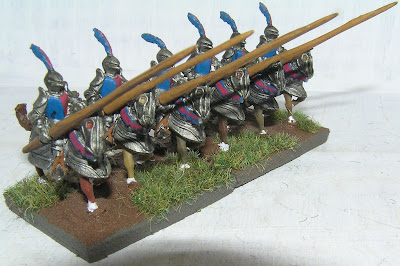 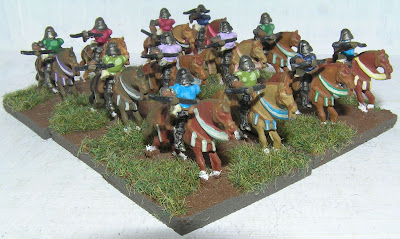 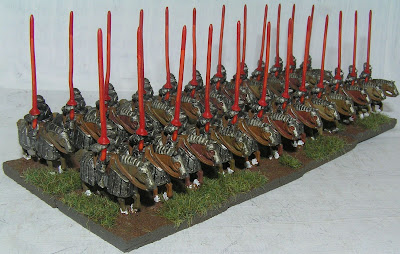 Because of the tied score between Richard G and Peter H I went back and compared % losses to place them as 4th and 5th. The G denotes the number of enemy generals killed.

Once the 2nd round games are completed by  I shall update the tournament results on my blog.
Posted by Drew Jarman at 17:32:00 No comments:

I had a trio of Hungarian knights that I purchased from a friend as they were surplus to his needs. They were a Hungarian general and two Banderium. I had painted up two batches of ten Hungarian Light Horse Fast elements to use with my Medieval Germans and because I have not managed to sell any painted figures on EBay recently I decided that Project Lead Mountain needed a boost so I purchased some warwagons and some more light horse to create another totally new army. Since the armies infantry is generally regular I decided to given them a uniformed theme and opted to go with the colours of the Hungarian flag in use at this time of red and white. I have plenty of other figures in my collection to use to make up for any missing knights and other irregular infantry and I have a further sixteen light horse castings to paint up which I will style as Ruthenians or Cumans for variety. I really enjoyed painting this army and it made a different from the usual early Feudal stuff I have been painting until recently. 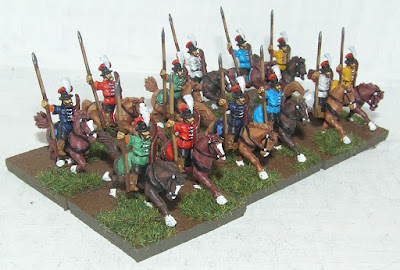 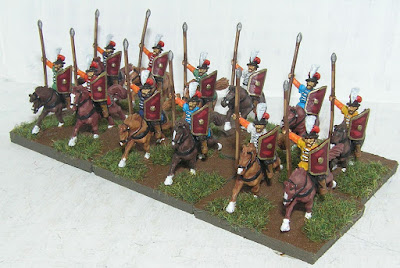 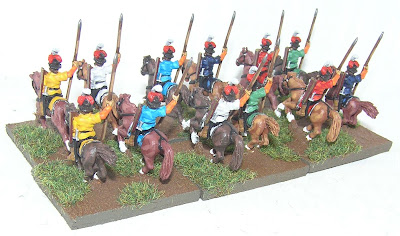 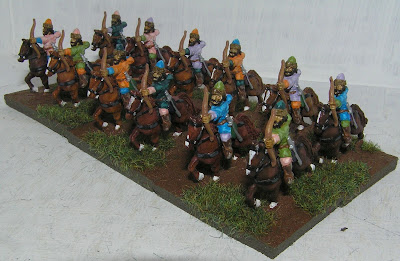 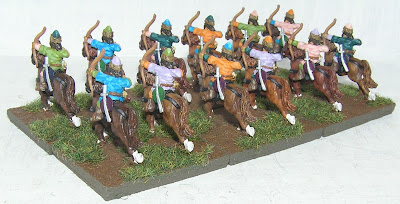 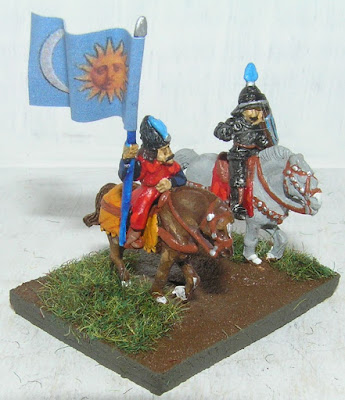 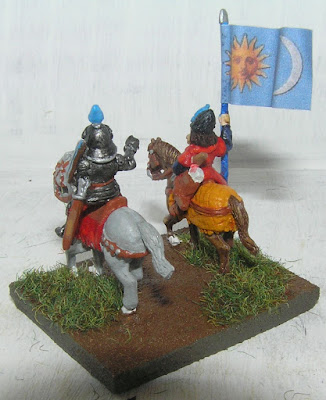 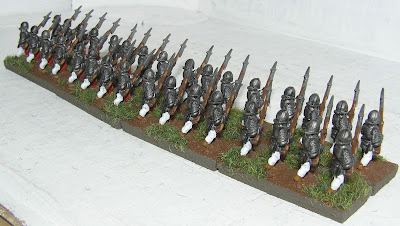 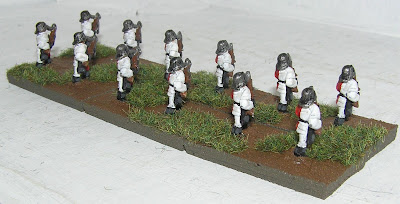 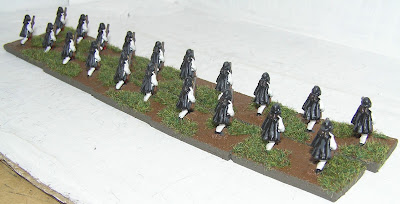 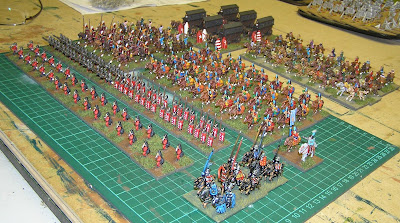