Here's the Runners and Riders for Iceni 2018 along with the 1st round draw. An interesting mix of armies taken this year. From books 1 x 4, Book 2 x 3, Book 3 x 1 & Book 4 x 4 and only three DBM list versions selected this year.

Ghaznavids - Amble Into View From EBay

I Must Stop Looking At EBay - Ghaznavids

Last entry for this week, having already bought the Later Hungarians I then saw a very nicely painted Ghaznavid army built for use with ADLG. The mix of figures means that it makes the core of a very nice army which can be bulked out from my own collection and fielded on the tabletop almost instantly. The commanders are on round bases as per ADLG so will have to be rebased for DBx but apart from a few minor repairs due to damage in transit via the courier the army will just need to have magnetic sheeting applied to the underneath of the bases and its good to go. The ADLG style camp is on an 120 mm x 80 mm base and isn't really suitable for this army so will probably go back on sale as I don't need it for my own collection. Quite a bargain for £210.

Here are the pictures from the EBay listing none of which really don't do the painting justice. My own pictures are below these.

Here are my own pictures: 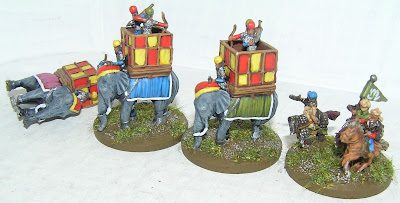 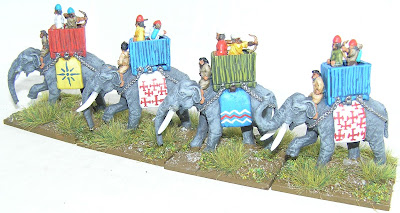 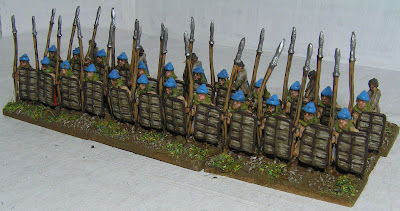 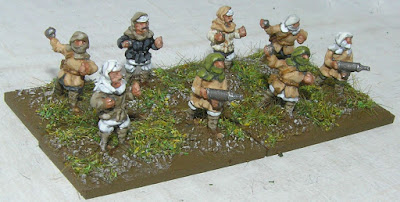 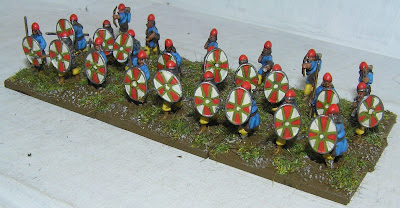 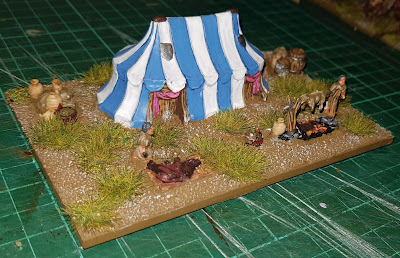 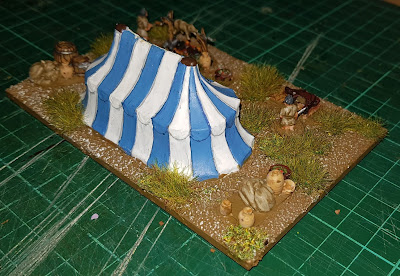 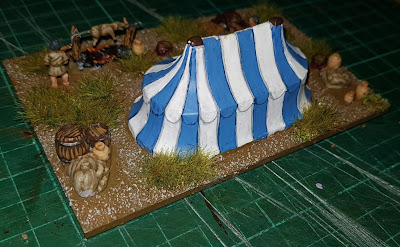 Postscript: Spent today 15/09/18 rebasing the four elements on the round bases and putting magnetic sheeting under all of the elements. Just need to complete the four new bases and paint all the edging and they army is ready to go! I also resold the camp today so that's a result!
Posted by Drew Jarman at 09:07:00 1 comment:

Another EBay Bargain Rears It's Head

I have stopped painting Scythians at present as I fancied a break but browsing on EBay yet again last week and what do I see 16 elements of very old Minifigs 1st Generation Horse Archers. Whilst the riders are unchanged in today's Minifigs range their horses have gone through three changes since the late 1970's. These castings are clearly some of the very oldest they sold.

Unfortunately one horse was totally destroyed in transit meaning my original purchase of 32 horse archers has dropped to 31 horse archers and the prospect of going into the Project Lead Mountain reserve stock of old redundant 1st Generation Minifigs horses to find a suitable replacement. I will match paint the damaged horse and reuse the perfectly good rider in due course. I will almost certainly end up rebasing these castings but for now they will do out of the box.

UPDATE 03/01/19
Above you read that I had a destroyed horse when this purchase was delivered. I finally got around to finding a suitable horse from Project Lead Mountain - a 1st Generation Minifigs horse which I painted over the Xmas break. The horse [painted brown] is on the right as you look at the picture below and with the old rider and new basing you can't really tell the difference between the old horse and its replacement as I tried to match paint the style. 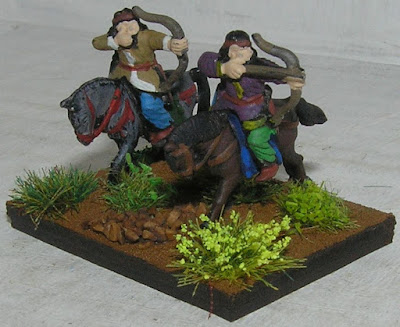 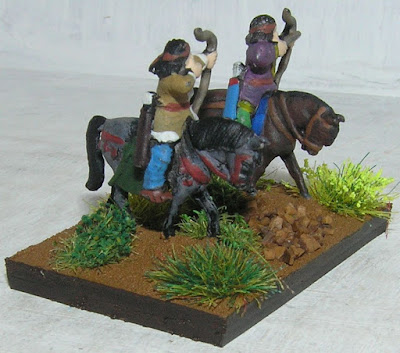 Whilst working out what I needed to buy to complete my Serbian Army I came across this listing for a very nice Later Hungarian army. As you will probably realise if you examine my blog I already have a Hungarian army but that army was created with Hungarian specific elements. Whilst the liveried knights are nation specific lots of the elements are actually fairly generic. I paid slightly more than I wanted to pay but I still got a bargain in my opinion. There were no command elements in the army but since I am planning to add it in to my own collection this isn't a problem. I have had to rebase the war wagons though as they models are too long for the bases and I needed a pair of horses for the 4th war wagon. I paid £343 inc delivery for 78 mounted, 110 foot and 4 war wagons. I might eventually sell a few items but at the moment I will probably keep most of it until I am sure what is actually surplus to requirements. 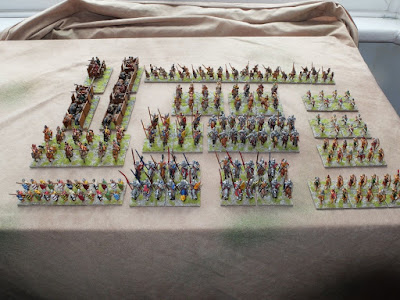 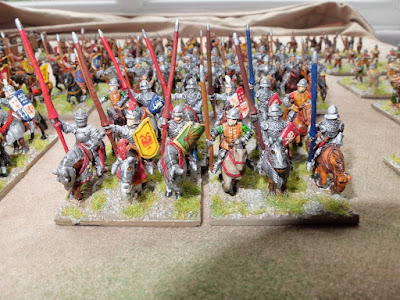 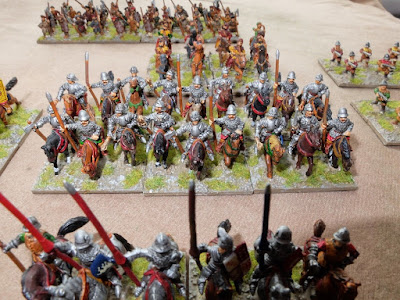 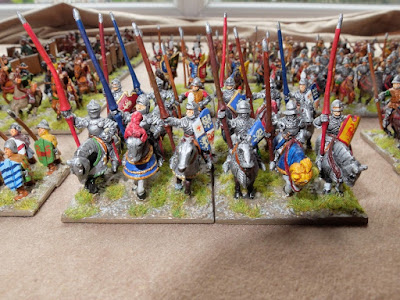 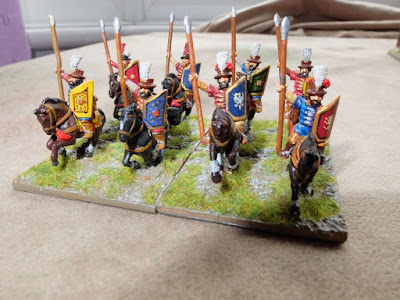 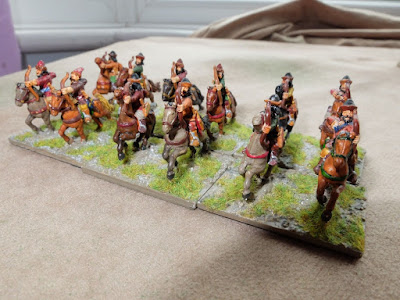 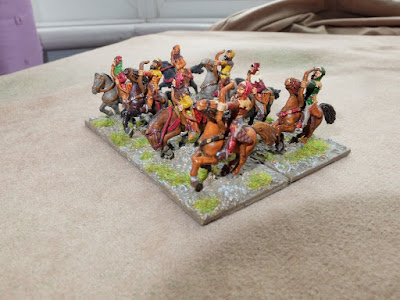 These rather nice Essex Bohemian Spearmen ended up becoming the front rank of some Bw X/O elements and were then sold on to someone at my wargames club. 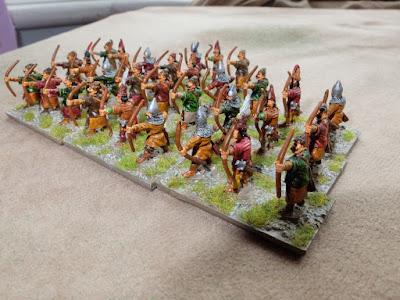 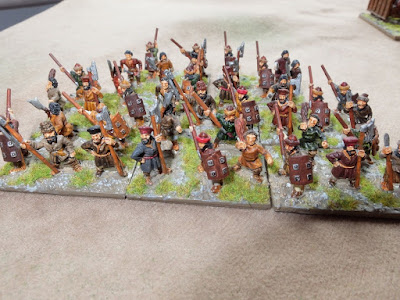 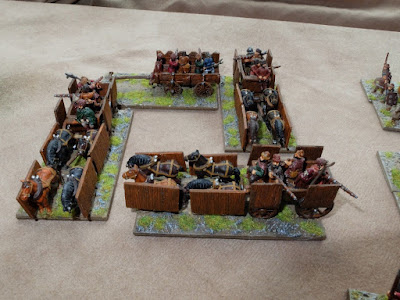 Here's the rebased war wagons. There's no overhang at each end now due to them having fewer horses and the 4th wagon now has some motive power. Usual Vallejo texture paste, Umber edging and completed with a mixture of tufts and some scatter gravel.