I had a big bag of Museum Miniatures MD08 Welsh Spearmen Lmi Tunic Hose One Shoe Running infantry left over after I had finished off my Welsh Army. It seemed a waste to leave 81 figures unpainted so I knocked them out to make a total of 27 elements of Irr Ax X for my army to ensure I can now field any combination of 500 AP. I ignored the fact it said they were wearing hose as I decided that since they were probably poor they may have been bare legged and this matches the rest of my army and once painted flesh and dirt washed look just fine. The one shoe comment comes from a reference in history which whilst odd seems it might be accurate.

A Selection of Purpose Built War Wagons on 15mm

Some Warwagons I have created over the last 3 years.

Congratulations to Jeremy Morgan for coming 1st yet again for the third year running. Also thanks for John Graham-Leigh for gathering all the results together and collating them to produce the annual rankings.

I have achieved my best ever ranking and managed 9th place overall this gaming year much to my surprise.

Peter H at Essex Warriors was in 3rd place on 80 VP with Peter K leading the pool on 93 VP after playing the last of his games so Peter H opted to gamble his 16 VP BYE score in an attempt to win big and overtake Peter K.

I ended up invading and opted to place three areas of Boggy RGo to prevent Peter from placing any ambushes in them. As it turned out the terrain placement wasnt that helpful to Peter and only marginally more so to me.

I knew Peter had a lot of knights, cavalry and light horse but didnt know his army organisation. I opted to use my superior manoeuvrability of my Military Order commands by deploying them both on one flank with the Crusader CinC to the left.
I have previously blogged about the OOB for the Later Crusaders and its under the Sun 7th June 2015 date.

I invaded and pushed forward my CinC to get in as quickly as possible with my Irr Kn F against his mixed line of bowmen and spearmen. My right flank Military Order command attempted to push round his far left flank of LH F.

Peters ally turned out to be unreliable and remained so for three of his turns. He shot a couple of my knights back in recoil before I hit them frontally. I lost one to combat but also killed a file of spearmen creating a break in his line. My casualty count was slowly rising as my knights waded in to his infantry line taking two elements off for everyone I was losing.

Peters ally came on side and he attempted to filter it towards my baggage but was starved of PIP's. I slowly advanced my Irr Sp I forward in an attempt to protect the now threatened knights when Peter threw two Cav in from his Sub Gen command at my end pair and lost to a recoil. This placed the losing Cv just in front of the end DBE Kn element at an oblique angle less than a base depth away.I pushed my spears forward to hit this Cv element overlapped and recoiled it into the DBE Kn destroying all three elements meaning I had taken haif the commands D count in one combat.

Meanwhile in the centre I was only one element away from breaking his CinC's command and to my surprise his whole army because Peter had organised his army as follows:

The combat swung back and forth three three bounds with Peter just managing to hold on. During this time span I filtered my Mil Order foot crossbowmen in front of his warwagon protecting the end of his line and managed to destroy it to bow fire which gave me the last element required to break his army.

The final score was 10-0 which when converted to the BHGS score system we were using for the tournament gave me a 31-1 win.

I had lost a total of four Irr Kn F in the centre and the CinC's command single handedly won me the game except for the contribution the crossbowmen had made. Had Peter held on for another pair of bounds I think his luck would have run out as there were at least 3 infantry elements at risk of losing when I won.

Below is a sequence of pictures I took through the game to try and illustrate what I have written above. The game only took less than two hours to complete which surprised me as I had honestly expected him to just run me over off the table top. 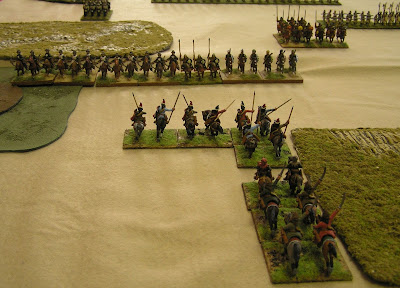 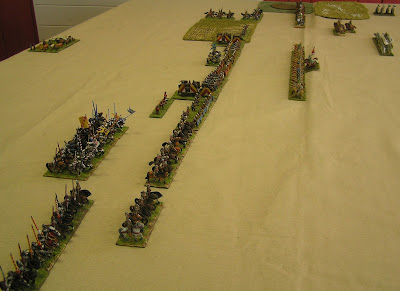 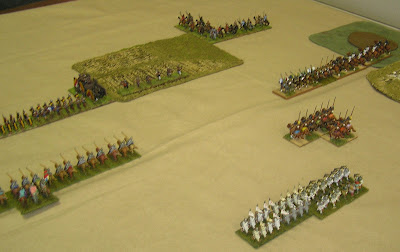 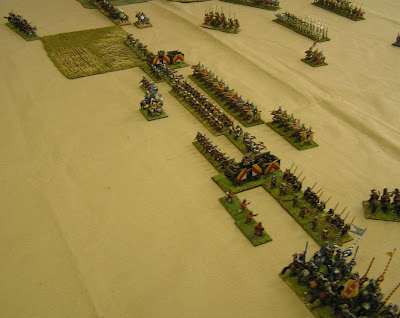 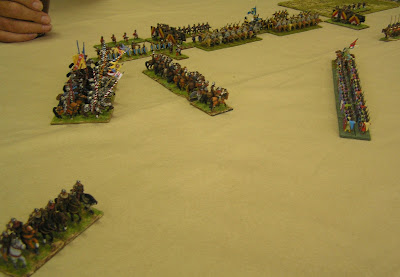 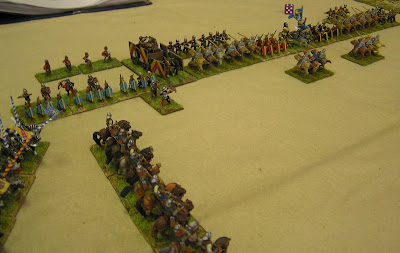 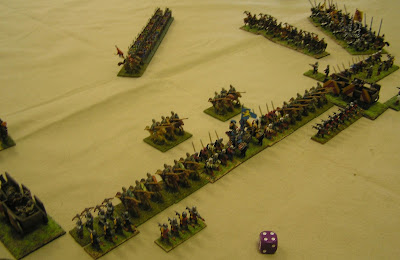 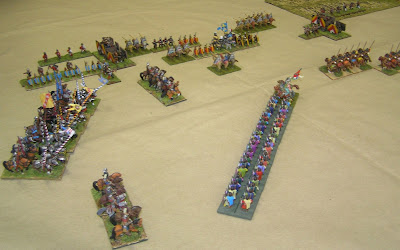 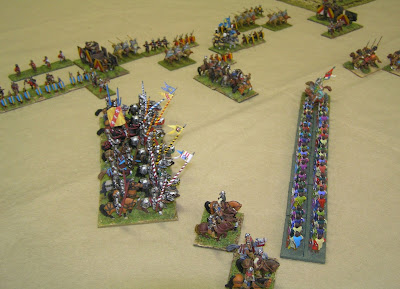 I forgot I needed some suitable baggage!

Now my Welsh army is finished I realised that after reading the DBM list notes which said
"The fullest descriptions of Welsh warfare are by Giraldus Cambrensis, in 1188, who says that success in war was measured solely in loot He says that it was their habit to steal anything they can lay their hands on and to live on plunder, theft and booty".

Bearing this in mind I thought, hmm, what do I have I can use to create suitable baggage elements for the Welsh then?

I had a look in the lead mountain for suitable ideas & came across a bag of Magister Militum farm animals & boy drovers. There was also some cattle and a couple of herdsmen whose make I cannot remember.

Given the animals would be most likely stolen or otherwise local I did a bit of research for old breeds that would have lived in Hereford, Worcester and Shropshire. These gave me the basic ideas for accurate colouration of the animals.

Well here it is as promised the blog update on my new Welsh army.

Lots of new troops painted for this project, most of which were in my lead mountain! Thankfully I do not have to paint up any archers as I already have these in my collection to use with other Feudal armies. The Welsh foot were generally unarmoured except for their dismounted cavalry they fought with a mix of long and short spears, swords, axes and some used shields whilst others didnt. It meant I could use what ever figures I had available either painted up in an old collection of DBA armies or just spare painted foot plus a load of newly painted figures. My painting style has greatly improved over the years but when you base up old figures to match new additions the painting differences don't notice as much once they are all under a new coat of varnish.

EBay Purchase of Some Arab Figures

I recently bid on and won 2 EBay Lots

I won a total of 25 mounted and 56 foot. There were two damaged spears on the mounted figures and the foot were unbased. A quick sort out with a pin drill and some superglue fixed one of the figures whilst I decided to completely carve off the other broken lance to turn the figure into a bow firing commander. I added magnet sheeting to all the bases, painted the edging to match my own figures and matched the basing of the cavalry as best as I could.