Email ThisBlogThis!Share to TwitterShare to FacebookShare to Pinterest
Labels: Covid

Tournament entered & list checked OK. Just waiting on the R&R to be announced along with the 1st Round draw. I have not been gaming much since Covid-19 destroyed most of my social activities & the subsequent fall out resulting from that of course.
Here are the Runners & Riders & 1st Round draw.

Britcon returns on 13th-14th August at Nottngham Trent University. They are putting on DBM 15mm 400 AP Singles with the theme being you cannot use an army that you have taken to any tournament in the last five years. This means the 2017 Gaming Year up until the time of the tournament.
This means that I cannot use the following armies
2017 - Khurosanians, Wallachians, Later Muslim Indians, Welsh
2018 - Abbasids, Scythians
2019 - Scythians, War of the Roses, Sargonid
2020 - The Mighty Covid-19 Alliance
2021 - Yuan
Between now and Britcon there are a few more tournaments being held
25th-26th June Venta Icenorum 400 AP Singles OPEN Theme
16th-17th July Attack 500 AP Doubles Open Theme
plus
17th-18th September Iceni 500 AP Doubles Open Theme
22nd-23rd October Vexillium 500 AP Doubles Themed any army between 477 AD & 1071 AD
It was confirmed that any army Brom Book 1,2 & 4 are allowed as long as they are chosen from the date range specified.
Book 1 - Early Vietnamese
Book 2 - Classical Indian, LPIA, Early Armenians, Tamil Indian, Kushan, Scots-Irish, Nobades Blemye & Beja, Later Moorish, Alan, Hsien Pi etc, Abyssinian, Early Visigoth, Early Ostrogoths, Pictish, Sassanids, Burgundi, Gepid, Early Franks, Old Saxons, Packche Korean, Koguryo Korean, Silla Korean, N&S Dynasties, Hunnic, Sub-Roman British, Visigoth, Patricians, African Vandals
Book 4 - Komenan Byzantine, Cilician Armenian
I can possibly field 6 from this list plus 37 from book 3?
https://drewjarman.blogspot.com/2014/09/dbm-armies-i-can-field-with-little.html
Will make the tournament quite interesting especially if Patricians become the default safe option or elephants turn out to worry the knights in the time span.
Additionally there is a DBM Tournament just outside Paris in Aulney Sous Bois
5th-6th November 400 AP Singles Any Army up to 666 AD
Posted by Drew Jarman at 00:07:00 1 comment:

Back in November 2019 I blogged about painting up Anyscale Resin Tents to sell. I have finally painted up the last 12 tents I have for sale.
They are simple enough to be totally generic for use with almost any army and period, 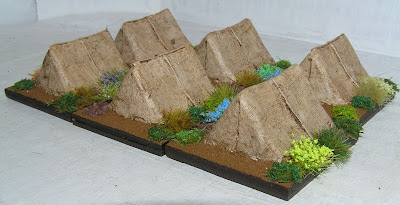 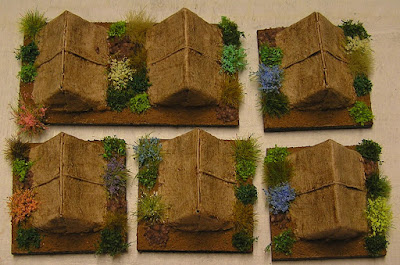 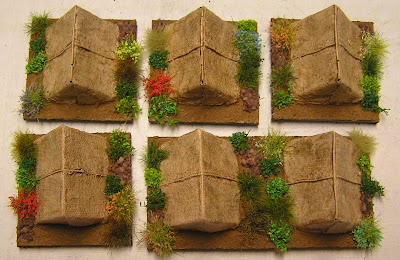 2nd Batch of six tents
Last up are some LaserCraftArt animal pens which I have had waiting to be completed for a few years! They are simple MDF baggage type elements idea to use to indicate where livestock might be contained within an army encampment 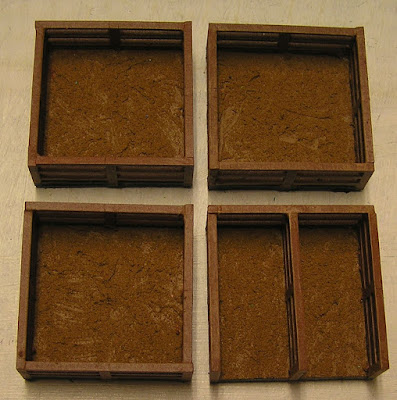 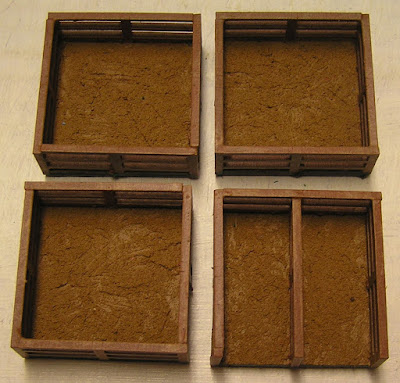 2nd Batch of Animal Pens
Thats all to blog for now
This brings the painting tally so far for 2022 to
240 foot [72 elements]
9 Feature Pieces [9 elements]
20 Baggage Elements
24 rebased Infantry elements
Posted by Drew Jarman at 17:42:00 No comments:

Having completed my T'ang Chinese back in June 2019 I thought that I had nothing more to do with the army. Upon reflection I decided that I didn't like the uniformed look that the Chinese Militia blocks had.
see blog entries
https://drewjarman.blogspot.com/2019/01/late-tang-chinese-part-7.html
and
https://drewjarman.blogspot.com/2018/12/late-tang-chinese-part-5.html
for the original units. I decided that I will rebase them and took half of the completed elements to mix up the colours to give them that irregular peasant look. I still have another 24 bases to mix up but for now they can wait. 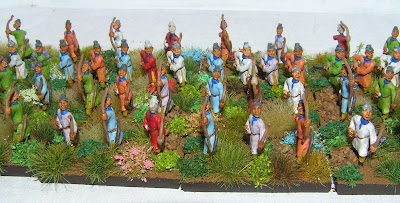 Having got fed up painting Minoan Infantry I decided to paint up the few missing items that really make for a good looking army. I got a friend to 3D print the specific items as I cannot justify purchasing a 3D printer.
Knossos was the capital city of Minoan Crete. The city pre-dates the Minoans by quite a long time frame. Its been the subject of multiple excavations over the last 150 years.
I wanted a Built Up Area to act as a feature piece if I ended up defending Minoa. I had considered scratch building a feature but struck it lucky when I found exactly the item I wanted on this 3D printed Items site.
https://www.myminifactory.com/object/3d-print-knossos-palace-crete-greece-201037 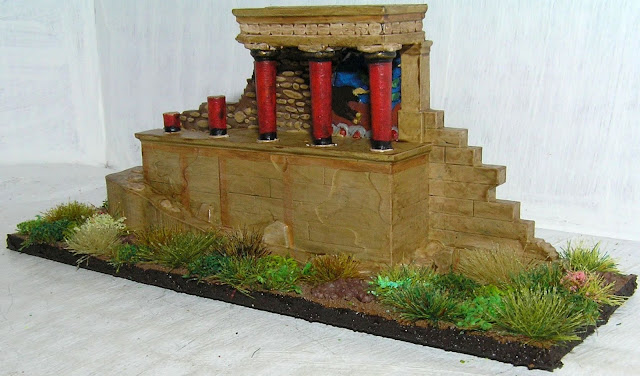 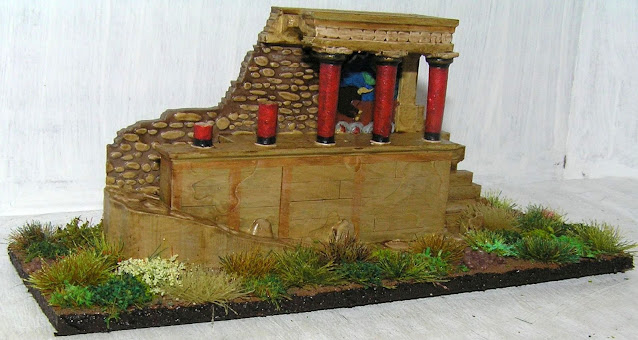 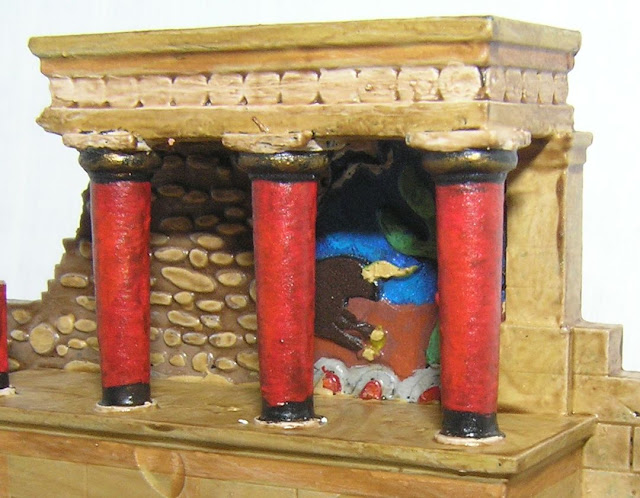 My friend Dave found the 3D models and he kindly gave me the four missing Triakonters I needed to complete the Minoans. The ships come on their own bases so I had to put them on larger bases and build up the surface so the galleys blend into the sea. The are available to download from here.
https://www.wargamevault.com/product/377531/Ancient-Galleys-2?fbclid=IwAR2oUOaeSlpNdVUzBpoLzb8MFaJ8hX2LMGndlDPUjQaoa6nqB-ySLM_Xy20
They painted up really well and using Vallejo Sandy Paste for the sea was just rough enough to be painted etc to look like it was sea.

No Minoan Army would be complete without a Minotaur. I decided to make mine a huge bronze statue. I got it from Thingiverse https://www.thingiverse.com/thing:3456137
I asked for two 3D prints because I might end up selling one on. They are on standard 40mm x 40mm bases so can be used as baggage elements 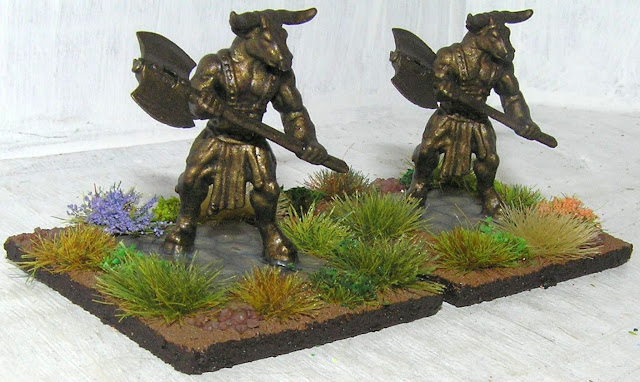 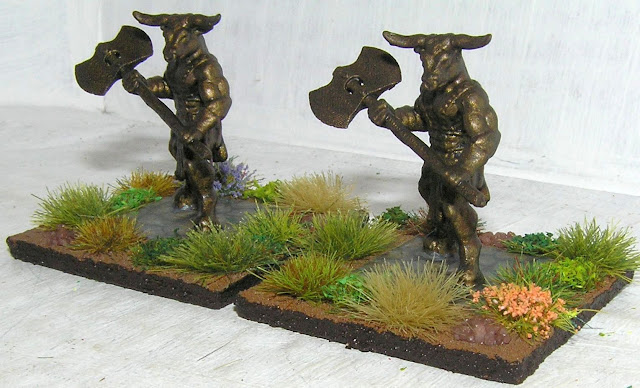 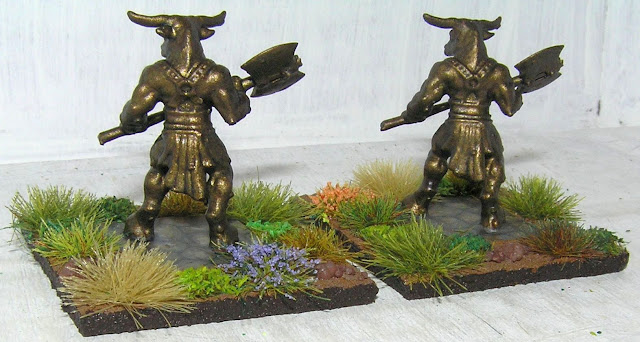 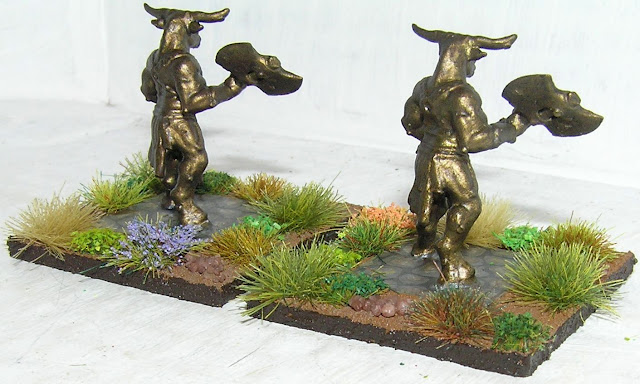 Over Xmas 2021 Dave at Museum Miniatures announced that he was providing a free STL file of a Trojan Horse. He had no plans to sell it as the model is far too large but is perfect for 3D printing.
Here is his publicity shot from the company Facebook page.
I got two printed out by my mate Dave and have tried two different colour schemes. 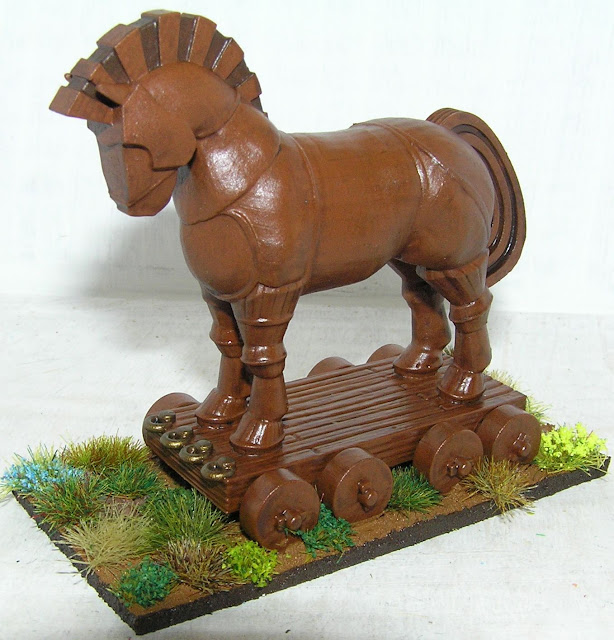 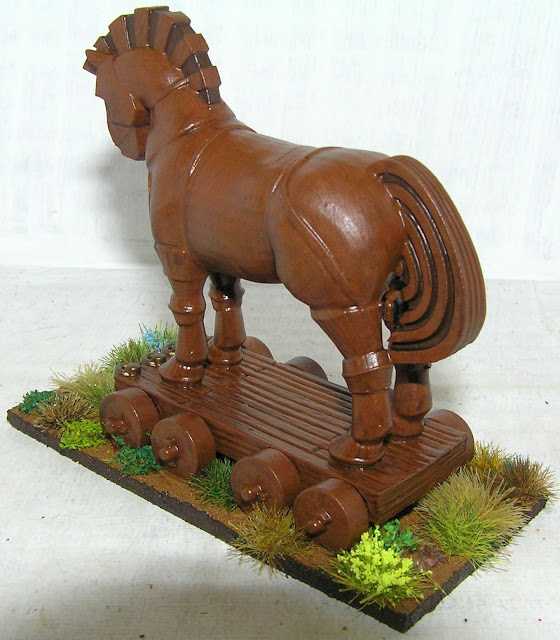 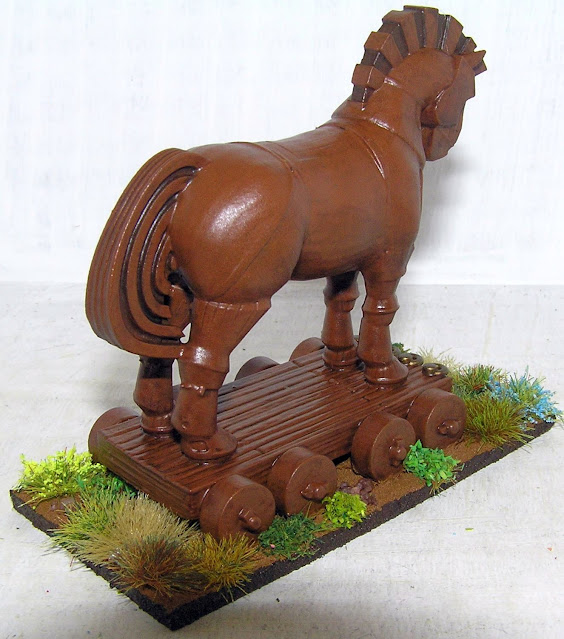 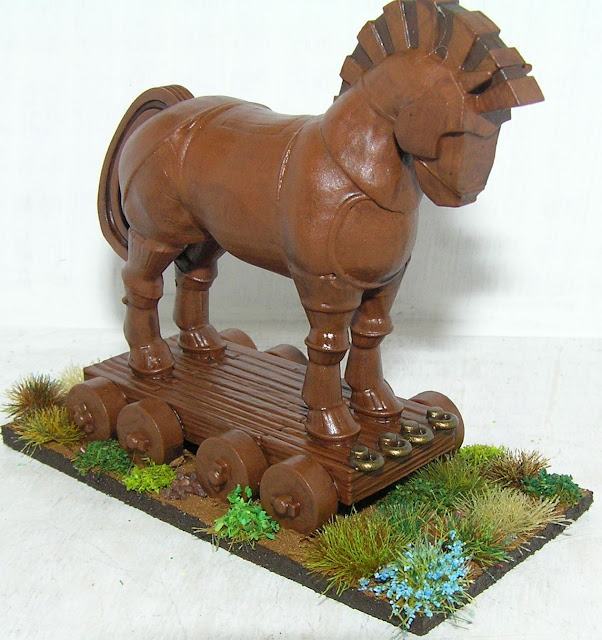 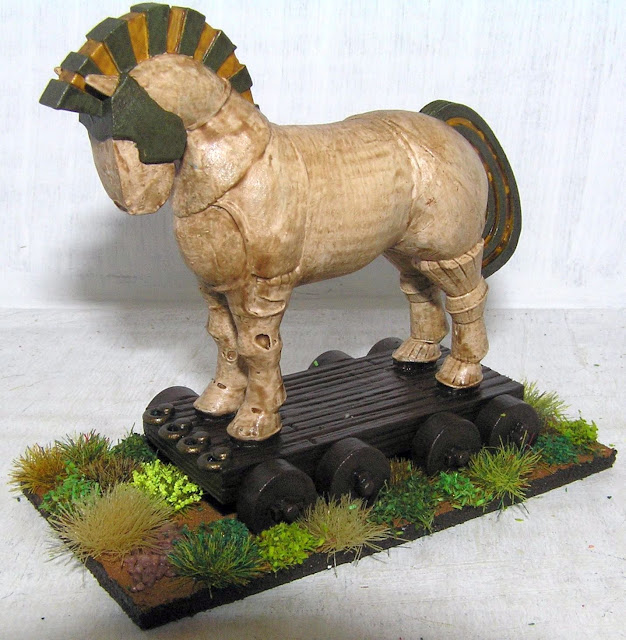 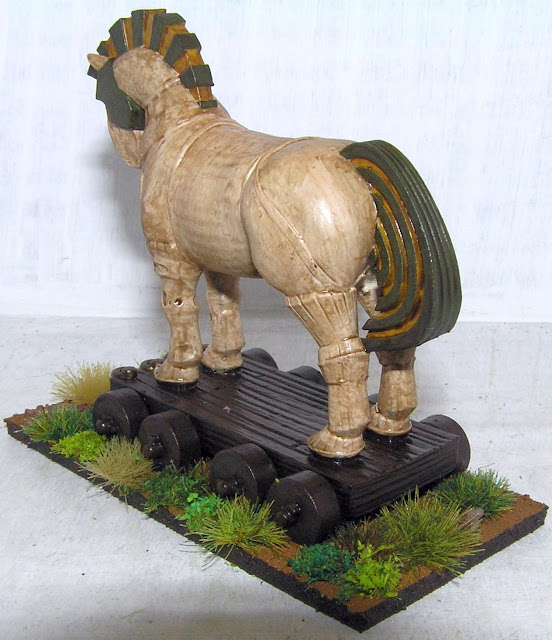 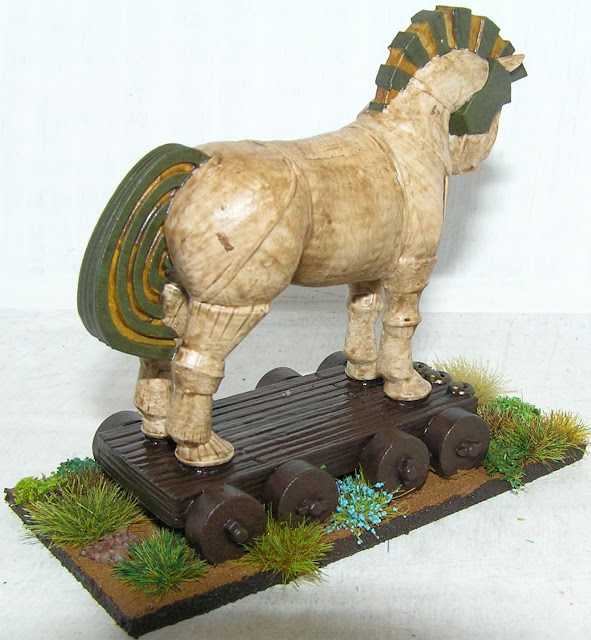 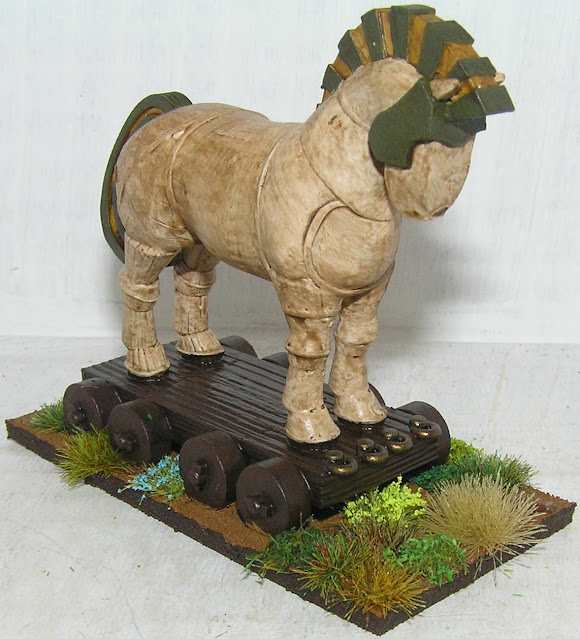 Having had a bit of a busy time I have finally completed another batch of 12 Reg Pk X Minoan Pikemen. This project seems to be taking much longer than I anticipated & I am only 25% through the Reg Pk X required to complete this army. The Museum Miniature MY11 Kilted Pikemen with figure 8 shield are now discontinued.

Last week I impulse bought a large batch of Myceneans off EBay I paid £80 for 16 Chariots & 178 infantry so was about half price. The plan is to paint them & resell them to subsidise the original outlay of my Museum Miniature purchase. The Chariot Miniatures came with separate shields, both Tower & 8 shield. They are marketed as Mycenean so will be suitable for Minoans & Trojans.
I completed the first batch of 48 figures today & I am quite pleased how they turned out. I used MYG5 with Tower Shields for the Reg Pk X front rank & MYG21 without shields for the Reg Pk I rear ranks 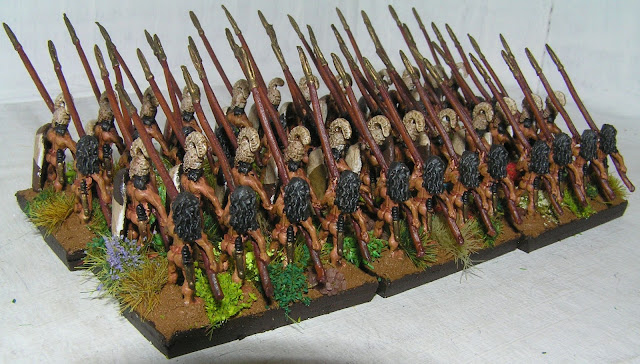 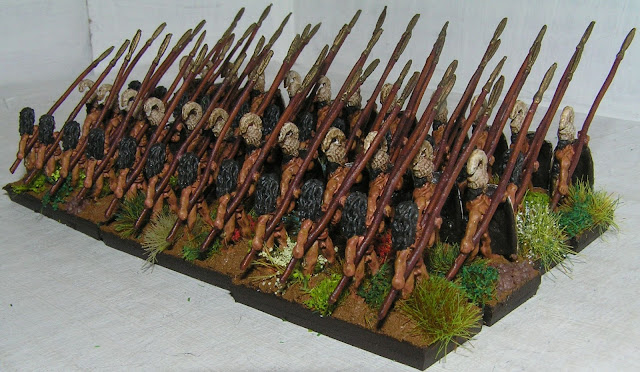