Its been a slow couple of weeks as I got on with other things and tried to ensure that the generals for the Delhi Sultanate 15mm army look the part.

The generals castings are all taken from the spare figures I had left over from the MOG1 packs which I had used for my Cilician Armenian Generals. The escorts are all Essex castings but they came out of my spares box so I have no idea of the figure codes and cannot find them illustrated on the Essex Miniatures website. The standards are copied from the design mentioned on the Wikipedia Delhi Sultanate page. 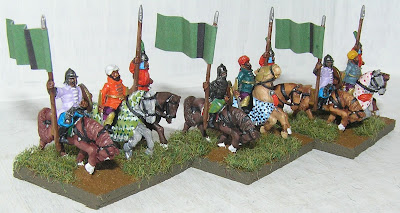 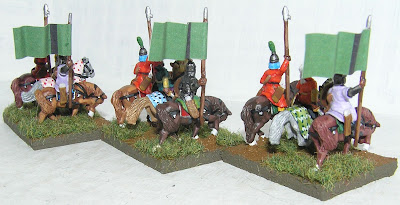 Lastly I completed the last two elements that make up the Afghan contingent that I blogged about in part 2. I used Essex MOG7 castings and only needed to make up two elements of light horse. 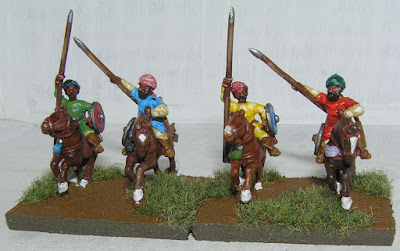 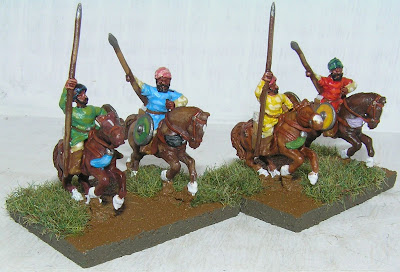 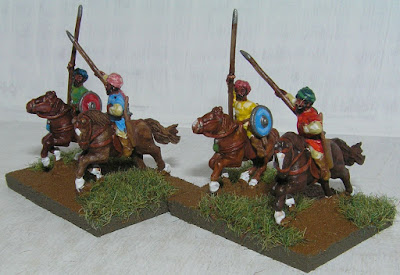 I am currently painting up the Ottoman artillery crews and the Handgunners whilst I await the missing bits I need to create the Rocketeer elements.

Running Out of Storage Space?

As an avid gamer I am always running out of storage space and this year is no different. I had a quick look online at Halford and found they were having a 50% off sale.  http://www.halfords.com/workshop-tools/storage/tool-chests-cabinets/halfords-professional-4-drawer-metal-portable-tool-chest Well this was too good to miss so I reserved it online and popped out this morning to collect it. It turned out they didnt have any in stock despite the reservation and I was offered the display tool chest. Apart from it being a little dusty there was a small dent in the side which I pointed out so I got another £3-00 off and ended up paying £25-99 instead of the £57-99 full price. If four draws are too many they also do a three draw version which is £21-50 in the sale. 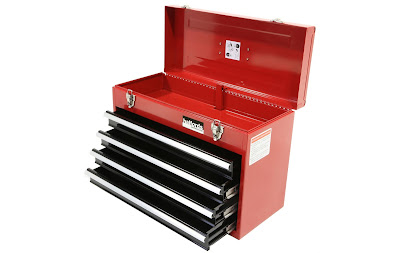 The box holds a lot of elements and it finally meant that I could store the latest addition to my Arab-Muslim-Indian army collection which now takes up three of these chests. I still have some space spare in the third chest for the remaining Muslim Indian elements I still need to paint up along with the troops I might end up buying to create a Hindu Indian army. It also meant that I could move my Attalid Pergamene army into the same tool chest that the Early Armenians are in.

I could have bought more than one but that would only encourage me to buy more figures and to be honest I am still only 75% through Project Lead Mountain!

I was asked to paint up four castings by a club mate. He said he knew they were not actually 100% accurate for what he wanted to use them for but since he had them laying around it was a shame to waste them. They are 15mm Legio Heroica Late Roman Light Horse Fast models. http://www.legio-heroica.com/img/ROM10.JPG for the 350 AD - 476 AD period. The castings are nicely sculpted and once cleaned up I found them quite easy to paint up, The DBx Army lists class them as either Reg LH F or Irr LH F depending if they are classed as Roman or Indigine. I looked at my usual sources for painting references and after checking the Ospreys and drawing a blank I went to the elderly WRG publications. The Later Roman one mentions them as looking much the same as the Later Byzantine Horse Archers but of course didnt tell you what they looked like. So I then looked in the WRG Dark Age book and found the reference there. It said either red or blue tunics and not much else. So with the scope given me that as long as they were distinctive he would be happy and that they didn't look too Roman I decided on this in the end. I made sure they were darker skinned than my usual Italian types. I hope hes happy with the end result. He requested that they were hand varnished and unbased.

Having taken on board Duncan Head and his useful comments about what the Afghan heavy infantry should look like I ordered some Grumpy's Ghurids from ERM. Tony Barr still has the moulds but only casts to special order nowadays as some of them are past it. I also ordered six of Grumpy's Dhow at the same time.

After talking to Duncan he confirmed that the wheeled mantlet thing isnt really historic and certainly not within the time line of the DBMM rules. He suggested I make some rectangular pavises and linked me some ancient fabric designs which I could use as a template to print out to cover he fronts of the pavise. After lots of work cleaning up the figures and glueing in my own 50mm long pikes I realised that theres no way that the pavise could fit with the figures on a 15mm base which forced me to based them up as DBE on 30mm deep bases. Thankfully I had eight more pikemen than I needed so used these to create spare rear bases to replace the front rank should it be destroyed to distant shooting. The DBMM list also allows the Afghan pikemen and Auxilia to be rear supported by Psiloi archers so I dismounted the Irregular pikemen from my previous post and made them into four more Irr Ax O and a pair of Irr Ps S to save wasting the painted figures.

I am very pleased with how the Afghan infantry turned out despite the time it took me to actually complete them.

Next up are the Grenadiers and Fireworks Throwers Reg Ps X. I already have some Arab grenade throwers but because this is a new army I decided to make up some more. A quick look through the makers our there led me to Essex Miniatures 15mm Moghul range, specifically the MOG15 Grenade Throwers. The army list gives you the option to use up to five elements of Reg Ps X which of course means that one pack of figures wasnt enough. As I needed to order two packs I ended up with eight elements but I can always sell off the surplus elements in due course. Because they were regular troops I decided to give each element a uniform and I also gave every figure identical boots, turbans and waist sashes. I am not sure if they look accurate or historic as I could not find any illustrations on line so this is my own best guesstimate.

Finally in this painting batch there are the elephants Irr El S with infantry escorts. The list gives you the option to take six Delhi elephants. Having already used Khurasan Miniatures elephants for my Samanids I knew how they looked so decided to put in a special order for the elephants from the USA. I settled on the KM-1109 Ghaznavid elephants as they have nice looking metal plate armour. Since I needed some infantry escorts I had also previously some more infantry from Essex Miniatures from their Moghul range. MOG09 Indian Spearmen and decided that I would use four infantry escorts per elephant. The elephants howdahs are a paint to assemble properly as you must get them square and if you try to glue them onto the elephant's first they just fall apart. After a couple of days cleaning up and assembling I had six elephants and forty-two crew to paint. Some people paint their howdahs but I decided to experiment with waterslide transfers so each individual elephant would have an identical set of transfers on their howdah. For some reason my elephants ended up with different head designs but I am not that bothered as the additional variety allows me to experiment a bit. I painted the elephants in three colours to allow me to differentiate between models if they are in different commands. Luckily they come with two different trunk designs so this is also useful when you have elephants in different commands. 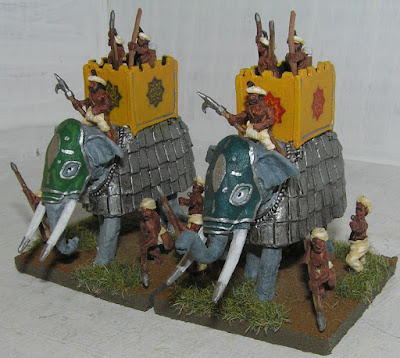 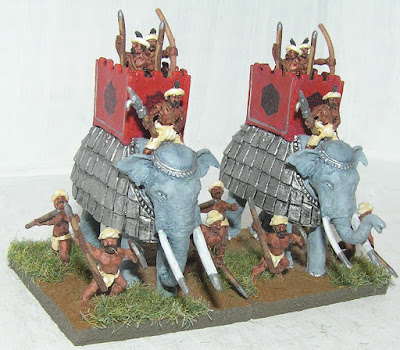 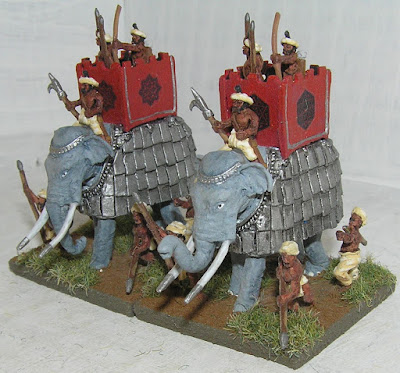 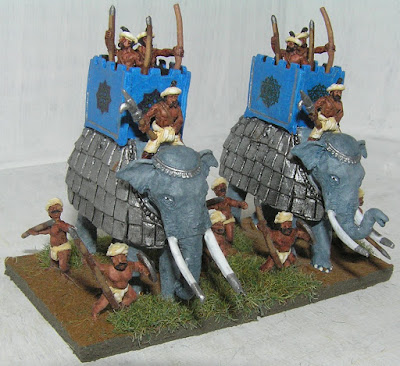 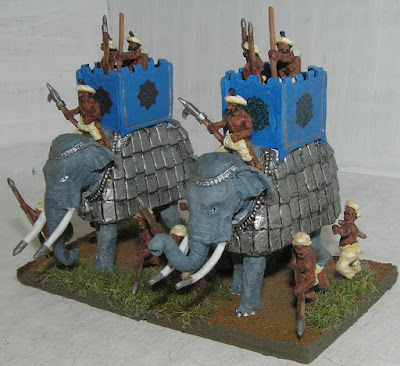 Lastly we come to the left over figures I have from the now scrapped Afghan infantry from the previous blog post. They ended up being rebased as Irr Ax O and Irr Ps S so were not wasted. 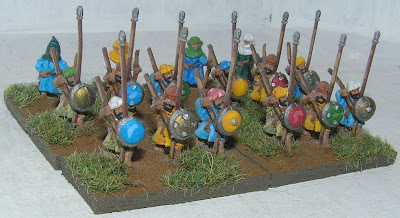 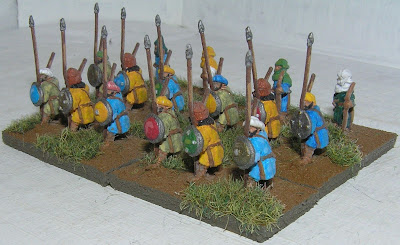 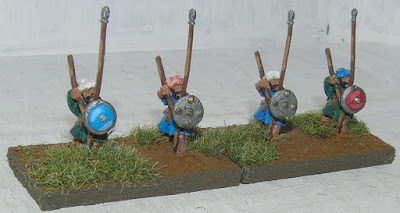 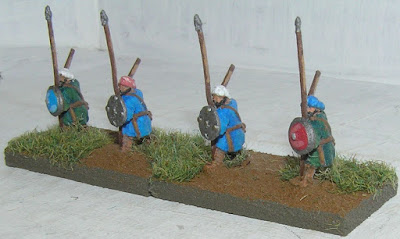