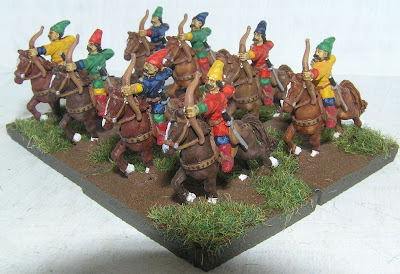 Following on from my weekend away at The Challenge Bob at the club asked for a game. I offered to give him a chance to take on my Later Hungarians, using the list I used at the Challenge. He suggested Hussites so we ended up playing a 400 AP game lasting over five and a half hours before we agreed to call time.

My army structure is as listed on the Challenge16 report blog entry.
see http://drewjarman.blogspot.co.uk/2016/06/report-back-from-challenge-or-case-of.html

This meant the Hussites were a very small yet tough and fairly slowly moving army.

We dice to see who invaded, we both chose the Summer my Hungarians Ag2+5 v Hussites Ag1+4 meaning Bob defended. He placed a 1 FE BUA on a 1 FE Hill [S]+RGo on his base line near to the central sector. I decided not to place any terrain. I did this to make use of my superior mobility and to try and not give Bob anywhere to anchor his army on.

Given my army was 22 elements larger than Bob’s it was still surprising to see that his army was much wider frontally than mine. This was because a lot of my troops were mitigating Ps that supported from the second or third rank.

My deployment and battle plan involved using my superior mobility to sweep round the open flank of his army and take it in the rear whilst my infantry closed frontally.

Once I moved forward Bob immediately withdraw his mounted troops towards his central rear to protect the rear of his wagon line whilst he moved over his other mounted line from his right flank to try and use his superior numbers and quality against my numerous light horse.

Frontally in his centre he deployed three Bombards supported by three warwagons a lone blade and his Kn CinC to ensure they could always move on a 1 if necessary.

The game moved at a fast pace with little actual effect except for Bob taking out my left flank warwagon on a 6-1 using his warwagons allowing him to slowly advance on his right flank and get around my open flank. Back on the other side my LH charged him and failed to make any effect against his outnumbers knights facing his rear. Using the usual time format in a tournament I notified Bob that after 3 and a half hours with only my 2 elements lost it would have been a 16-16 draw. We then carried on playing to try and get a result. More bad combat dice meant I was slowly losing elements from my infantry commands but my LH were beginning to make a dent in his knights protecting the rear of his battleline.

We each had a warwagon facing each other on my far right flank and after what seemed like six bounds of shooting yet again he 6-1 my other warwagon to take this down and exposing the other far end of my own battleline. I finally managed to throw in my infantry against his line and there was much pushing and shoving as the blades fought each other to a standstill. Another lucky 6-1 took out a pair of my spears but I had a spare Ps element to protect the gap in the line.

On my left flank Bob was slowly pressing forward his warwagons and I was PIP starved and he eventually shot down the Kn sub general from that command meaning I had to roll higher than 4 on three dice to survive, luckily this time I roiled two 5’s allowing me to save the command but meaning I was restricted in what I could do movement wise.

At just after the five and a half hour mark my LH finally got the last knight and Inferior LH element necessary to break the sub generals commands protecting his left flank and we ended the game after his turn when he threw everything in to see what happened.

It was a long and very tough game for me and I enjoyed facing a very unusual enemy army that isn’t seen that often on the tournament circuit due to its perceived probable inability to get any sort of chance of a win within 3.5 hours.

Below are a series of pictures showing how the game progressed up until the point the two infantry lines started pushing and shoving each other. On the left of the last picture you can see the sub general and CinC of the Hussites just before I managed to overlap them which resulted in a drawn combat. I was pushing my CinC and Royal Banderium behind his open flank and had planned to use the three Kn S to batter his line from the rear but time ran out and I was unable to get close enough to his CinC's command to affect the game. Given that his left flank command had broken I felt confident enough that I would be able to swing into his CinC's command and eventually take it out as I only needed to get three elements to break this command and with it the entire army.

I have had a look at the Hussite list and suggested to Bob he might find the MM version more flexible as it has far fewer compulsory warwagons and different ratios of compulsory blades but there is an issue about the potentially large number of compulsory FO [TF in DBM] required in the DBMM list. This may change with v2 of those lists but these are as yet unpublished.

Update: The revised DBMM lists didn't change the mandatory TF and added in the illegal combination of Reg Bw X/I which cannot be used in either DBMM or DBM games. The aothor has not clarified this issue and the DBMM organisers have made them Reg Bw O and the DBM oranisets have mand the Double Based Reg Bw O and also made the TF an all or nothing option under DBM v3.3. 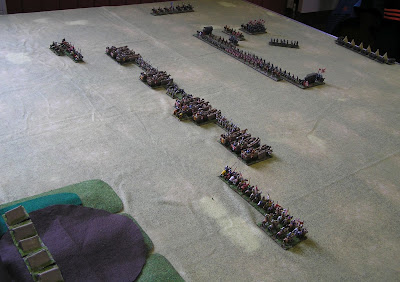 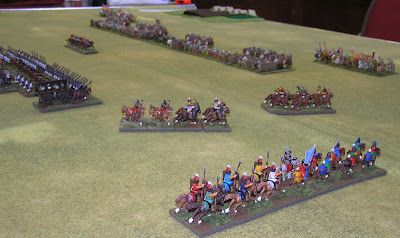 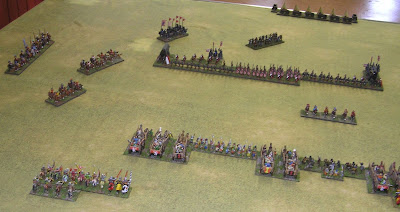 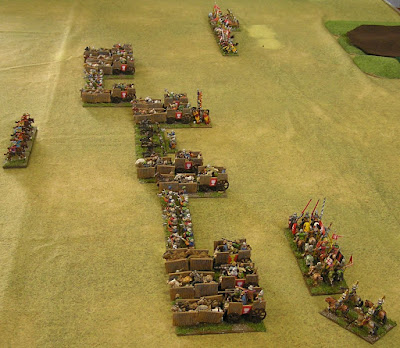 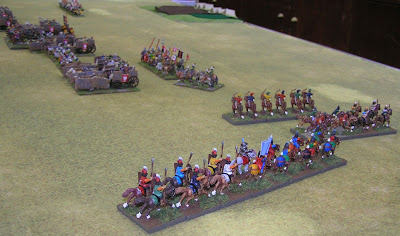 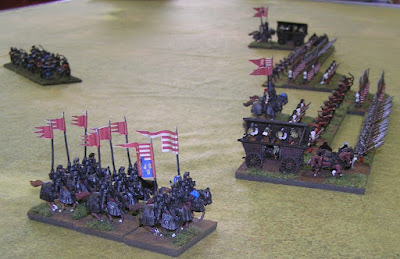 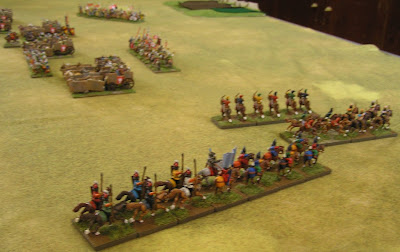 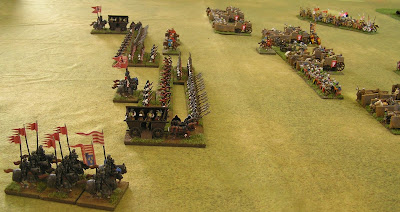 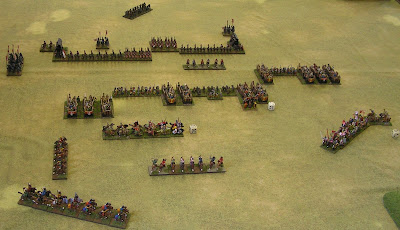 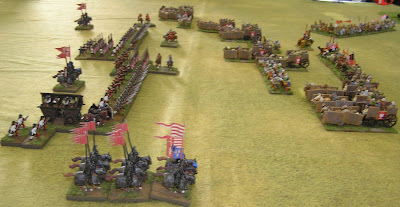 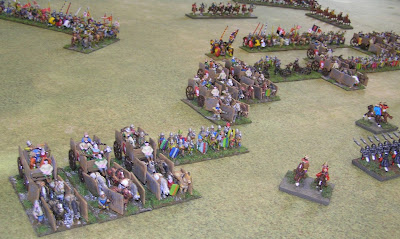 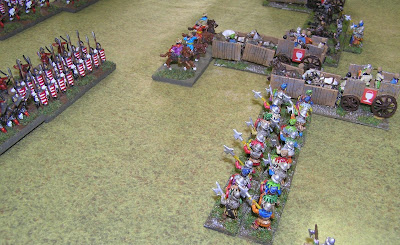 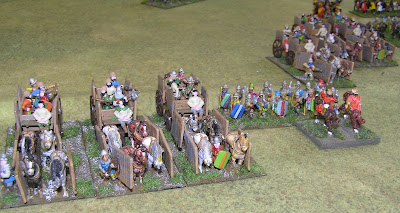 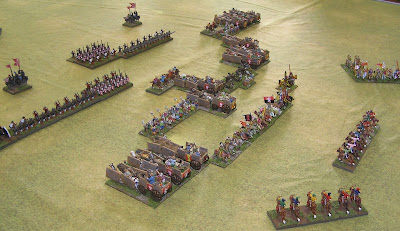 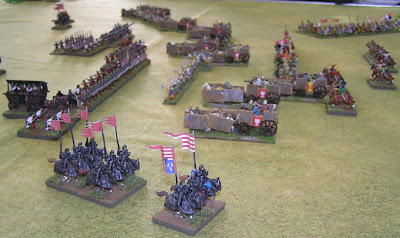 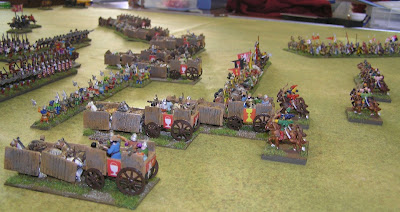 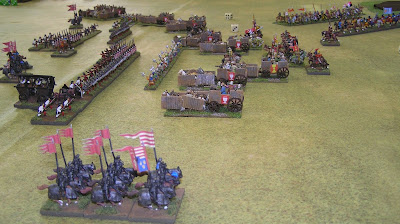 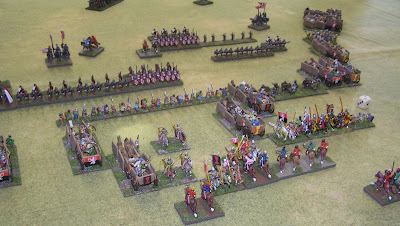 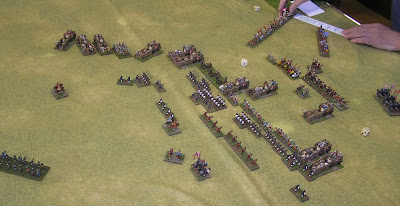 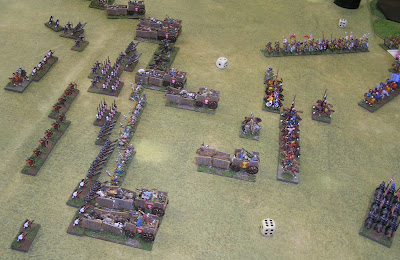