Having created a few ancient armies that get to have Enclosures as part of their terrain selection I looked to make some Paddy Fields or Bunds. I didnt find much in 15mm but found a seller on EBay selling fields for use with 28mm scale figures. When it comes to scales sometimes the label on the box is only a guide. They were listed as being 120mm x 120mm square and each field came with six rows of rice crop on raised earthen mounds. They were 3D printed items and as you can see from the pictures required quite a bit of trimming off to ensure that the earthen bank perimeter edges looked fairly uniform. 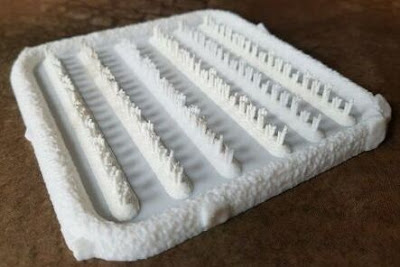 I purchased four complete field sets in all which allows me to model enough terrain options by just placing the fields next to each other as required.

After spending an hour cleaning up the 28 pieces provided I decided that I would only use five rows of crops within each field because I though they looked too crowded otherwise.

I painted the standing crops two different shades of green and coated the banks with Vallejo Earth Brown Paste. 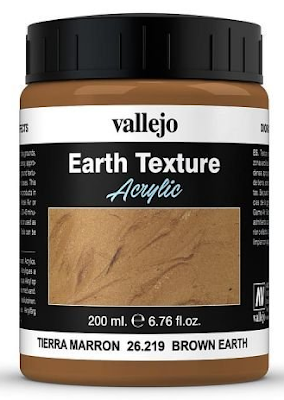 Doing so many at the same time took ages and I started to lose the will to live. I then coated each row of crops with Blackhat Coat d'arms Super Shader 420 Light Brown for contrast effect. I think that this didn't work as well as I thought it would and would use a darker shade if I ever repeated this task.

Next up were the fields, first of all I applied a complete coat of Earth Brown paste to each field, set them aside and gave them a dark brown wash on the bottoms and a Super Shader wash on the raised embankments. Because Paddy Bunds require to be water filled at all times their are growing rice crops I decided that I would try an experiment and purchased a new for me product. Namely Vallejo Water Texture Acrylic Still Water Effect.

Careful ready online of how to use it meant I didn't fall into the trap of just filling the tray up with it. It needs to be applied at no more than 2-3 mm thickness to avid excessive shrinkage and cracking as it dries out over the 6-12 hours it takes. Its supposed to be self levelling but requires careful use of the hands to ensure it actually spreads properly and a pin to pop any stray air bubbles which will ruin the effect. Anyway patience is a virtue with this stuff and I didn't suffer from any problems and to get the right finish I had to apply three thin coats to each field spread over two days, early morning, late night and then the next morning.

Here is the end result for the empty Paddy Bunds. 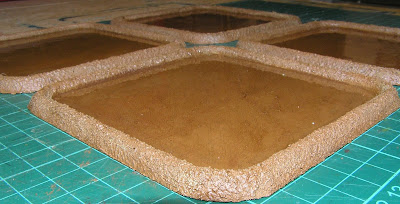 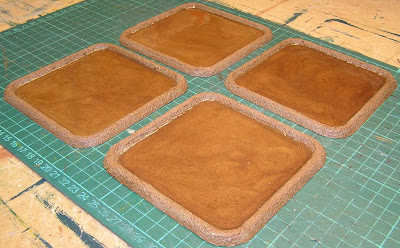 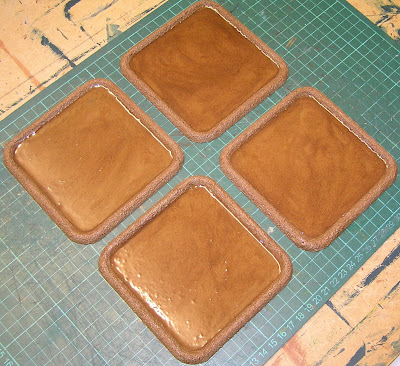 As you can see I got a nice finish with the water effect.
Finally here is how they look with the rows of rice crops placed within the fields. I left them loose so I can move them around any bases of figures that happen to be deployed or move into them. 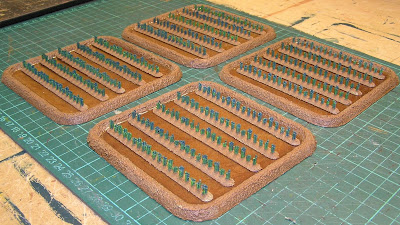 With the extra materials I had to buy to complete them I spent something just under £32 in all but I think the end result justified the expense.
Posted by Drew Jarman at 16:58:00